Extremely delighted to be taking part in the blog tour for STREET CAT BLUES by ALISON O'LEARY today! My thanks to the author, publisher and Rachel of Rachel's Random Resources for letting me be part of it all!  Today I'll be sharing my review along with a sneaky extract, which I hope you'll enjoy!! 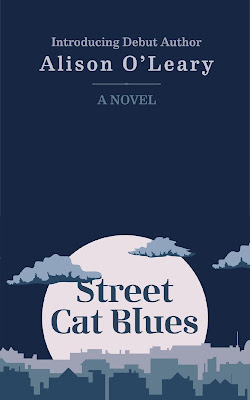 After spending several months banged up in Sunny Banks rescue centre, Aubrey, a large tabby cat, has finally found his forever home with Molly and Jeremy Goodman and life is looking good.
However, all that changes when a serial killer begins to target elderly victims in the neighbourhood. Aubrey wasn’t particularly upset by the death of some of the previous victims, including Miss Jenkins whom Aubrey recalls as a vinegar-lipped bitch of an old woman who enjoyed throwing stones at cats, but Mr Telling was different. Mr Telling was a mate… 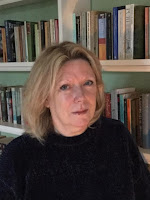 I was born in London and spent my teenaged years in Hertfordshire where I spent large amounts of time reading Agatha Christie novels and avoiding school. Failing to gain any qualifications in Science whatsoever, the dream of being a forensic scientist crashed and burned when a careers teacher suggested that I might like to work in a shop. Later studying Law, I decided to teach rather than go into practice and have spent many years working as a college lecturer teaching mainly Criminal Law to adults and young people.
I live on the south coast with my husband John and cat Archie. When not writing I enjoy crosswords, walking by the sea and drinking wine. Not necessarily in that order.

This extract is taken from Chapter Two in which we first meet Vincent, a street-wise cat who’s always got his paw on the pulse of what’s happening. Aubrey goes out to meet him to ask if he knows anything about how Mr. Telling died. Vincent mentions that he could ask the twins, Rupert and Roger, a pair of Siamese cats who run the manor.


He put one paw tentatively forward and then jumped sideways as a soft lithe shape brushed against him.
“God, Vinnie, don’t do that. You startled me.”

Vincent grinned, his green eyes gleaming. His gold-coloured neck tag glittered against his rich dark fur.
“Aubsie, me old mate. How’s tricks? Don’t seem to have seen you in a while. Thought I’d send Moses, see if you was all right. Was wondering how you were getting on. What you been up to?”
Aubrey shrugged.
“Not much. Same old same old.”

The two cats fell into step together and strolled round the side of the house towards the bins. Moses trotted along behind them. Funny, thought Aubrey, how old habits die hard. Sleek and well fed the pair of them, and yet they still couldn’t resist the lure of a good bin. Aubrey waited while Vincent sprang up and inserted a muscular paw under the lid of the nearest bin, pulling it towards him and jumping clear just as it hit the ground.

“Vin, I was wondering, did you hear anything about what happened at Mr Telling’s place today?”
“Number sixty-two? Talk is that he fell over and hit his head.” Vincent paused and looked at him sideways. “Why? You thinking something different?”
Aubrey nodded.

“It doesn’t seem right, Vin. Mr Telling wasn’t the sort of bloke to just go around falling over.”
“I’ll put the word out. The twins might know something.”

Aubrey felt a quick shiver run through his fur. A pair of Siamese, rumour had it that Rupert and Roger were running every racket this side of the railway bridge.

What a charming read this was! Lots of fun with a dark edge too! Who knew a cat would make for a great detective?! I loved Aubrey - the cat - as he was such a character and had an opinion on everything and everybody that crossed his path, be that good or bad!When there's a serial killer on the loose in the neighbourhood everyone is on tenterhooks. And Aubrey who is used to patrolling the area on his 'rounds' has been noticing some strange goings on. But when his friend Mr Telling is killed, he goes into action to try and find the killer as Mr Telling was a mate and kind to all the cats in the area. His owners, Jeremy and Molly, are also wary of what has been happening in the neighbourhood, and as Jeremy is a teacher he notices things amongst the pupils of his class too. When a murder happens that affects one of his students he has no choice but to get involved and this adds another element to the story, and quite a tender one too.Aubrey is a cat with attitude and he has the measure of the local residents! The chats he has with the other neighbourhood cats were a lot of fun to listen in to and he makes a number of quirky observations which had me giggling away!But alongside the snarky cat side, he also gets to show his caring side when he gets close to young Carlos and it just goes to show that you shouldn't judge people on their cirumstances. Carlos has been dealt a very bad hand as a kid and having to deal with something so traumatic, but he finds solace in sharing his problems with Aubrey and this was really touching to see.