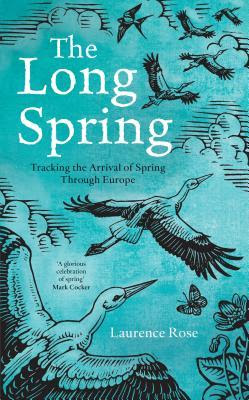 Exploring the wildlife, places, traditions, culture, and personalities associated with spring throughout Europe, and introducing readers to cultural, scientific, and historical research and his recollections of 30 years of continental travel, Laurence Rose paints a vivid picture of one of the world's most significant and beautiful natural phenomena: spring.

Laurence begins his journey in the first week of February, arriving in southern Spain with the storks that herald the beginning of Europe's spring on San Blas Day. Swallows, cranes and, later on, wild swans are his constant companions as he journeys his way north through Spain, France, and the UK, eventually crossing over to Sweden, Finland, and Norway before finally reaching the Arctic Circle four months later.

While on the road, Laurence follows live data from satellites tracking birds as well as other indicators of spring. Throughout his travels, he meets people living closely with nature. He also encounters new behaviours, such as cranes wintering in France, and explores how they link to climate change.

The further north he travels, the more unpredictable the events of spring become. At the end of his journey, Laurence reflects on what he has learned, as the long Arctic days stretch out into 24 hours of daylight.

All the I's for this one - Informative, Interesting and Insightful! - and I thoroughly enjoyed spending time immersed in this book as the Author followed the journey of many birds from Africa to Europe, sharing his thoughts on what he sees and what he learns along the way, and really gives you a greater understanding of the amazing journey these birds endure each year as they work their way through Africa, Spain, France, UK, Sweden, Finland and Norway.With the Author visiting each country along the way you get a real sense of the conditions they face through each leg and also how the landscapes have changed over the years as he has visited many of the countries over a number of years through his own interest and work he has been involved with for the RSPB. He gives a great background to the history of places he visits, along with damaging accounts of how enviromental disasters over the years have afffected different species and their habitats, and it is abundantly clear just how passionate he is about birds, wildlife and the planet in general.I loved hearing mentions of the birds that I'm lucky to get to see when they pass through the UK, such as the Egrets and Geese in Leigh On Sea, and Blackcaps in my back garden and that really helped me connect more with this book. He also says how important that ringing and satellite tracking has been in helping over the years in plotting the birds and their journeys and how that never used to happen.His journey allows him to meet numerous 'birdy' folk along the way and it's inspiring to know that there are so many people out there who are doing all they can to help protect many species, especially in a world nowadays where a lot of young people spend less time outdoors and don't seem able to connect to the world of nature as maybe we did in the past. It's written in a very relentless fashion, in diary form, sharing details from each stop along the way of birds he sees and other forms of wildlife too. I would have loved to see photos or more illustrations but am thankful for internet searches to illustrate for me certain bird species so I could get to enjoy some bird watching of my own, and it has definitely made me aware of different species that I can now hopefully look out for. A really enlightening read for all nature lovers.