#BookReview The Ruin of Kings by Jenn Lyons 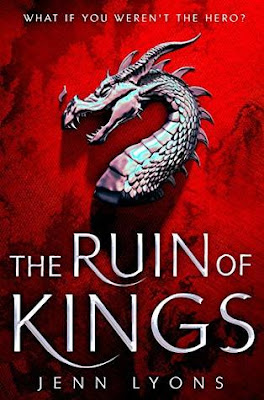 What if you weren't the hero?Kihrin grew up on tales of long-lost princes and grand quests - despite being raised in a brothel, making money as a musician and street thief. One day he overreaches by targeting an absent noble's mansion, hunting for jewels. There he witnesses a prince performing a terrifying dark-magic ritual. Kihrin flees but he's marked by a demon and his life will never be the same again.That night also leads to him being claimed as a lost son of that prince's royal house. But far from living the dream, Kihrin finds himself practically a prisoner, at the mercy of his new family's power plays and ambitions. He must also discover why his murderous father finds Kihrin more valuable alive than dead. Soon Kihrin attempts to escape his relative's dangerous schemes, but finds himself in far deeper waters.He becomes tangled in a plot to kill the Emperor, rob the Imperial Vaults, claim a god-slaying sword and free bound demons to wreak havoc across the land. Kihrin also discovers the old tales lied about many things: dragons, demons, gods, prophecies, true love - and the hero always winning. But maybe Kihrin isn't fated to save the empire. He's destined to destroy it.The Ruin of Kings is the first book in Jenn Lyons's epic new series.

An epic fantasy read!! There's magic, dragons, prophecies, feuding families, demons, secrets, lies - even zombies! You name it, you'll find it here and I loved every single minute of it, even if my brain did get a little scrambled and overwhelmed at times by the sheer scale of it all. But to be fair, my brain feels like that with most fantasy books so this was no different!I was a little apprehensive before starting this as I'd seen a few reviews saying how confused they'd been by the way the story was told - for me, this way worked really well and I loved the different perspectives of timelines in alternating chapters. The stories feature Kihrin -one from his point of view as he remembers it - and the other from a different starting point in the timeline leading up to the final chapters - and despite his bravado, you soon find out that Kihrin is a scared little lonely boy, unsure of his role in the world he finds himself part of. And that insecurity is only played on as he travels along his journey from petty thief to royal households. He's been lied to by so many that he often fails to see who he should trust - and there's many he shouldn't trust who he comes into contact along the way and it was fun as a reader trying to work out who you should be rooting for. I was often proved very wrong in my judgement!It's often a complex web of a storyline - with flashbacks, characters pretending to be others, shifting universes to name but a few - but the strength of the main protaganists keep you on track and it just all added to the fun and darkness!There are a number of footnotes that added extra background to various points and I loved the escapism of the whole story and am eagerly awaiting the next installment to see how the character of Kihrin adapts and changes with all he has learned over this adventure.