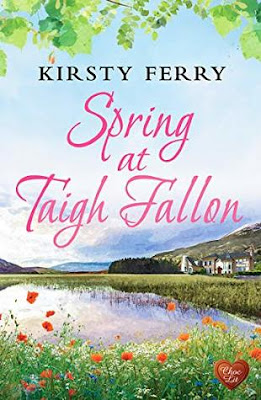 From old secrets come new beginnings … When Angel Tempest finds out that her best friend Zac has inherited a Scottish mansion, Taigh Fallon, from his great aunt, she immediately offers to go and visit it with him. It will mean closing up her jet jewellery shop in Whitby for a few days but the prospect of a spring trip to the Scottish Highlands is too tempting. Then Kyle, Zac’s estranged and slightly grumpy Canadian cousin, unexpectedly turns up at Taigh Fallon, and events take a strange turn as the long-kept secrets of the old house begin to reveal themselves … Part of a series, Tempest Sisters, which can be read in any order.

This is Book 2 in the Tempest Sisters series, BUT can be easily read as a standalone, although I can highly recommend Book 1 - Summer At Carrick Park if you'd like to read that first! And in Taigh Fallon we follow the story of Angel Tempest who is a jewellery maker in Whitby, and who loves all things gothic! She is no shrinking violet in her choice of clothes or sharing her opinion and she does a lot of that in this book!

When her best friend Zac learns that he has inherited his the mansion in the Scottish Highlands that used to belong to his Great Aunt, he needs a friend to go with him and who better than Angel! She immediately falls in love with the history and setting of the house, and feels a real connection to the place - more so than Zac! Taigh Fallon has also been left to his Canadian cousin, Kyle, who used to bully Zac when they'd both be in Scotland visiting, but times have moved on and they're both different people now so it's interesting to see how that dynamic works - Zac seems much more forgiving than Angel who had heard from Zac about how he'd been treated in the past!

While they are all there a few strange sights and sounds begin to fill the halls and Angel is both fascinated and a little freaked about the feelings she has. It's as if Taigh Fallon is trying to share the past with her and I loved the atmospheric setting and flashes back.

The storyline set in 1897 featuring Annis was a fascinating mix and added so much with an intriguing romance and seances and the link to the family history is always a favourite part  of mine in any story.

I loved the whole feeling of this book!  The friendship between Zac and Angel was really touching and her passion in sticking up for her friend against Kyle was admirable, if a little over the top at times! She's not one who quickly forgives and forgets!! I absolutely raced through this book and really hope there'll be more in this series as I love the time-slip elements!!