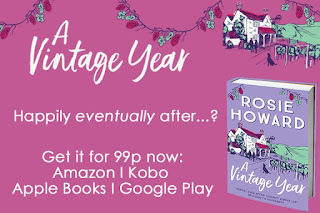 Delighted to be sharing my review today of book two in the Havenbury series - but it's one of those books that can easily be read as a standalone if you missed out on book one The Homecoming .

There's also a very special deal at the moment from the 28th February to the 7th March, so you can get yourself a copy for just 99p!!!! A deal not to be missed!! 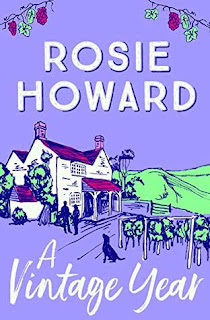 It started with ‘happily ever after’… But just three years after Bella’s fairy-tale wedding to fun-loving Charlie Wellbeloved, while her best friend, Maddy, is expecting a baby, her own weight gain is purely from comfort eating. Only her little Labrador Dolly can boost her spirits as she gloomily surveys her failing marriage and fledgling interior design business.
Dovecot Farm is just a rainstorm away from ruin, but Charlie is hoping against hope his family vineyard will produce a vintage year, saving his business, his childhood home and – most of all – his marriage …

When handsome and glamorous Rufus appears in the tight-knit Havenbury community, he quickly charms Bella and makes himself indispensable to Charlie, but he is guarding a secret. But is he really too good to be true…

After obtaining a degree in music Rosie Howard pursued a career in public relations, campaigning, political lobbying and freelance journalism but realised her preference for making things up and switched to writing novels instead. She lives in a West Sussex village with her husband and two children in a cottage with roses around the door.

Having enjoyed The Homecoming so  much, I've been eagerly awaiting book two in this series, and I haven't been left disappointed!! It was lovely going back to see how the characters were getting on - and it has proved to be a tough time for both Bella and Charlie in both their personal and professional lives and we get to follow their story in this book.

This book does a wonderful job of letting you see characters not at their best - the fact that they can make bad decisions and facing the consequences of keeping things to themselves and not being honest with one another. There were many times I just wanted to bang their heads together!!

Bella is obviously struggling with her self confidence which causes her to over-eat, and Charlie is having similar issues but with drink.  Their lives are clear for all to see that they're drifting apart from one another but they don't seem able to face up to their problems - and only do when it seems it might be too late to save themselves.

Alongside their struggles, we also get to follow a couple of other stories featuring characters around them - her friend Maddy (whose story was the focus for The Homecoming) with her pregnancy and also Charlie's mum showing that honesty and being bad with money may have been a family trait as she's left to deal with an upsetting encounter. The character of Rufus is also an interesting addition to the cast - his approach to life is just to throw money at problems and that seems to get him what he wants, but at what cost? He was rather brash and controlling for my liking but it's always good to have someone to dislike and shout at in a book!

I really enjoyed going back to Havenbury - it's not as light and humorous as book one but there are still many funny moments, and some sad moments too! - but it was a fascinating glimpse at marriage not being it's all cracked up to be if you're not open and honest with one another and how the characters deal - or don't! - with the problems that life throws their way.   Life isn't always rainbows and unicorns (unfortunately!) and Bella is a character who finds this out the hard way but she's never one to give up and her determination to get her life back on track is one to be applauded!