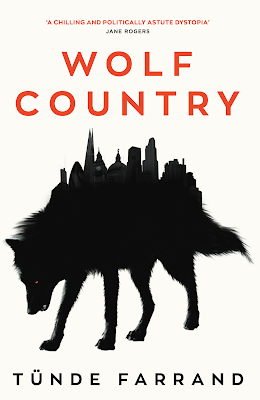 London, 2050. The socio-economic crisis of recent decades is over and consumerism is thriving.Ownership of land outside the city is the preserve of a tiny elite, and the rest of the population must spend to earn a Right to Reside. Ageing has been abolished thanks to a radical new approach, replacing retirement with blissful euthanasia at a Dignitorium.When architect Philip goes missing, his wife, Alice, risks losing her home and her status, and begins to question the society in which she was raised. Her search for him uncovers some horrifying truths about the fate of her own family and the reality behind the new social order.

I think it's a scary reflection of the times we live in nowadays when you read a book like this and you're not left wondering 'what if' but 'when' this will become a reality - and that's the clever thing about the way this story is written as there are already glimpses of the world we live in but just taken to the next degree, and it's a truly terrifying prospect facing Alice and her family as they're left to justify their 'Right to Reside' in a world that wants rid of those people who don't 'earn their keep' - be they the elderly, the sick, the unemployed - and they are left to make a choice as to when they want to die as not to drain the resources enjoyed by the 'Owners' and the wealthy.

Life in 2050 is a seemingly simple affair - if you're one of those working and thus qualify for the free housing, in separated areas linked to the type of job you do, and if you're married with a family or single.  But most people know no better so they're happy with a system that rewards them for making a contribution, and they believe the message from those in charge that the retired or sick are just a drain on society and are not worthy of wasting money on.  So their options is to move to a 'Dignitorium' where they will live out a period of time before meeting a peaceful end.  It tears families apart, including Alice and her family of her sister, parents and grandmother - it's heartbreaking seeing how heartless some can be to their own families because they believe what they're being told.  The elderly remember the world the way it was so only see this new system for how unfair it is and can do very little about it other than comply or go off grid.

When Alice's husband Philip goes missing after a terrorist explosion, her life is blown apart, and changes beyond recognition.  It's only then that she starts to see problems with the system and the more she finds out, the more horrified she is about the lies she's been told.

She's also forced to seek out her sister, Sofia, who has a completely different experience of the way this world works, and when the sisters meet up you can't help but notice how much hostility there is between them and realising how broken their relationship has always been.

I was totally transfixed by this story - horrified too - and it is a fascinating debut from this author.  It's one of those books that really gets under your skin.  The way the residents are portrayed in their compliance with a system that we see as being so wrong, but they see it as a world with order and purpose and see no reason for why those in charge would lie to them.  A classic case of the 'Divide and Rule' way of life and it made for such a chilling and captivating read that I'm eagerly anticipating more from this author in the future!

My thanks to the publisher for the advanced reader copy in return for a fair and honest review.