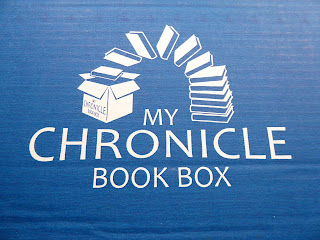 Time to share another unboxing with you!  And it's one of my favourites!!  The fabulous My Chronicle Book Box which sends out a box every quarter, full of fabulous books - you choose Sci-Fi & Fantasy, or Crime & Mystery - and related gifts!!

And with every box that arrives I'm as pleased as punch with what is inside - there may have been extra squeals this month too when I saw one of the books that was included!!  Shall I show you?! Look away now if you're waiting for your box still to arrive!! 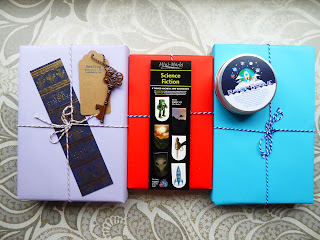 Let's start with the gifts first ... build up the anticipation!! 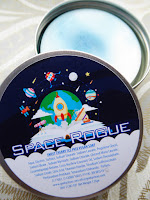 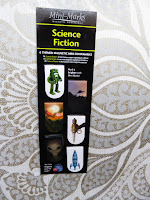 AND NOW TO THE BOOKS!!

THE BINDING by BRIDGET COLLINS

A signed edition hardback copy! Along with an equally stunning bookmark, and a beautiful vintage key which is also a bottle opener!! 😍 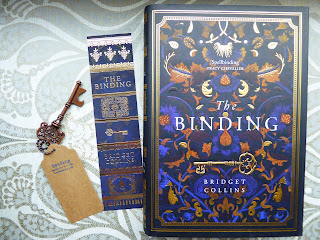 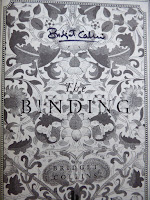 Imagine you could erase grief.Imagine you could remove pain.Imagine you could hide the darkest, most horrifying secret.Forever.Young Emmett Farmer is working in the fields when a strange letter arrives summoning him away from his family. He is to begin an apprenticeship as a Bookbinder—a vocation that arouses fear, superstition, and prejudice among their small community but one neither he nor his parents can afford to refuse.For as long as he can recall, Emmett has been drawn to books, even though they are strictly forbidden. Bookbinding is a sacred calling, Seredith informs her new apprentice, and he is a binder born. Under the old woman’s watchful eye, Emmett learns to hand-craft the elegant leather-bound volumes. Within each one they will capture something unique and extraordinary: a memory. If there’s something you want to forget, a binder can help. If there’s something you need to erase, they can assist. Within the pages of the books they create, secrets are concealed and the past is locked away. In a vault under his mentor’s workshop, rows upon rows of books are meticulously stored.But while Seredith is an artisan, there are others of their kind, avaricious and amoral tradesman who use their talents for dark ends—and just as Emmett begins to settle into his new circumstances, he makes an astonishing discovery: one of the books has his name on it. Soon, everything he thought he understood about his life will be dramatically rewritten. 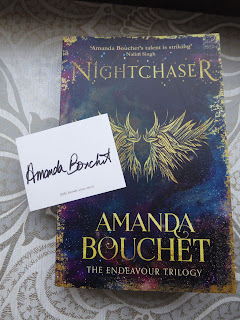 Tess Bailey: the galaxy's Most Wanted.Captain Tess Bailey is in deep trouble. She and her crew are on the run, pursued by a tyrant who'll take them dead or alive. Tess's best hope is a tall, dark, and much-too-appealing stranger, Shade Ganavan, who says he can help her. But his motivations are far from clear...Shade Ganavan: arrogance, charm...and that special something that makes you want to kick him.With the dreaded Dark Watch closing in, what Tess and Shade don't know about each other might get them killed...unless they can set aside their differences and learn to trust each other before it's too late. 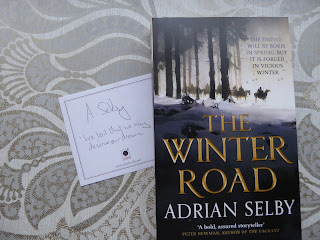 A gritty and epic adventure to appeal to fans of Mark Lawrence, Andrzej Sapkowski and Joe Abercrombie – The Winter Road is a fantasy novel which remembers that battles leave all kinds of scars.

The greatest empire of them all began with a road.

The Circle – a thousand miles of perilous forests and warring clans. No one has ever tamed such treacherous territory before, but ex-soldier Teyr Amondsen, veteran of a hundred battles, is determined to try.

With a merchant caravan protected by a crew of skilled mercenaries, Amondsen embarks on a dangerous mission to forge a road across the untamed wilderness that was once her home. But a warlord rises in the wilds of the Circle, uniting its clans and terrorising its people. Teyr’s battles may not be over yet . . .

All roads lead back to war.


Not a bad little selection of books and goodies eh?!  I was so hoappy to finally get my mitts on a copy of The Binding after swooning over the cover online for what seems like months now, and am really looking forward to the other books as well as they are new authors to me!