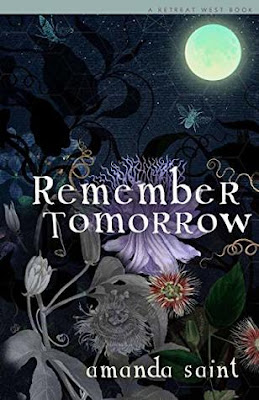 Extremely delighted to be the latest stop on the Blog Tour for this fabulous book that I hope you'll all be eager to find out more about!. My thanks to the author, publisher and Anne of Random Things Tours for letting me be part of it all!

England, 2073. The UK has been cut off from the rest of the world and ravaged by environmental disasters. Small pockets of survivors live in isolated communities with no electricity, communications or transportation, eating only what they can hunt and grow. Evie is a herbalist, living in a future that’s more like the past, and she’s fighting for her life. The young people of this post-apocalyptic world have cobbled together a new religion, based on medieval superstitions, and they are convinced she’s a witch. Their leader? Evie’s own grandson. Weaving between Evie’s futurist world and her activist past, her tumultuous relationships and the terrifying events that led to the demise of civilised life, Remember Tomorrow is a beautifully written, disturbing and deeply moving portrait of an all-too-possible dystopian world, with a chilling warning at its heart. 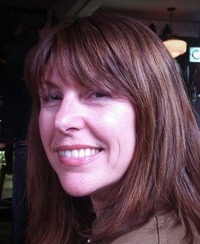 Amanda Saint’s debut novel, As If I Were A River, reached #3 in the WHSmith Travel charts; was selected as a NetGalley Top 10 Book of the Month; and chosen as a Top 20 Book of 2016 by the Book Magnet Blog. Her short stories have been widely published in anthologies and literary magazines, twice appearing on the Fish Flash Fiction longlist and the Ink Tears Short Story shortlist. She runs her own creative writing business, Retreat West, through which she runs writing courses and competitions; and an independent publishing house, Retreat West Books. Amanda also works as a freelance journalist writing about climate change and environmental sustainability

It's always a little too worrying when a dystopian story comes along that feels frighteningly possible, and that's how I felt after reading this book! It captures the mood perfectly of just how easy it can become for people to stop thinking for themselves, and believing everything they hear and are told and how the consequences of this are devastating for those who aren't so easily controlled, and I loved how this book really gets behind the 'them' versus 'us' frame of mind and makes it all feel a little too close for comfort with how things are in the 'real world' around us right now.

The story is told over a number of timelines - don't worry, this isn't as confusing as it sounds like it could be! - and follows the point of view of Evie who is being demonised as a witch, mainly by her own grandson Jonah, who at 17, seems to have become the self styled leader of the community and his word is treated as gospel in this future world which is bleak, dark and very evil.

Young people have no memory of how life was, so their perspective on the world is shaped by what they've seen as they grow up and that is hardship for all, lack of food etc, and their mistrust of the older generation who remember life before is clear for all to see in the way they are cast aside as using 'witchcraft' and how their suffering for the previous generations actions. Evie tries to talk to him but his only thought is to punish her so all she can do is run and count on the friendship of others to help her.

The story then goes back in time to see how Evie was when she was younger, and how she got together with Tom who was a protester against the evils of the governments of the world who they accused of destroying the world and environment for their own gains, along with putting out fake news... sound familiar?!  Her time with Tom really opened her eyes as a young woman but the innocence of youth can often mask the reality and soon Evie finds herself in a very difficult position.

We then get to see Evie later on in her life, as she deals with motherhood in a world that is ripping itself apart and turning people against one another and it is a sfascinating and scary journey that we go on seeing how easy people can sleepwalk into a world that just doesn't seem to care.

With so many parts of this book resonating with society as it can feel nowadays, I loved the pace of this story alongside the message it was trying to share.  The character of Evie had a great voice for telling her side of things as she'd seen life as  it was and how much it had changed for the worst over the years.  I found the first half of the book to be the strongest with so much thrown at you that set the tone, but the second half still made for terrifying reading and gives you as a reader so much to think about - and worry about too!! 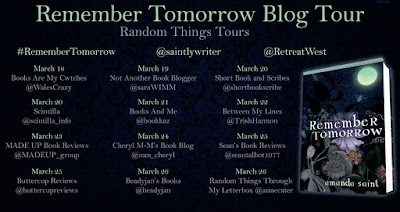