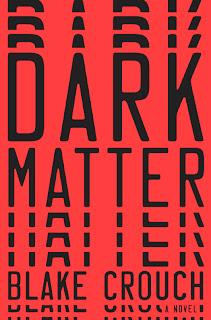 “Are you happy with your life?” Those are the last words Jason Dessen hears before the masked abductor knocks him unconscious. Before he awakens to find himself strapped to a gurney, surrounded by strangers in hazmat suits. Before a man Jason’s never met smiles down at him and says, “Welcome back, my friend.” In this world he’s woken up to, Jason’s life is not the one he knows. His wife is not his wife. His son was never born. And Jason is not an ordinary college physics professor, but a celebrated genius who has achieved something remarkable. Something impossible.Is it this world or the other that’s the dream? And even if the home he remembers is real, how can Jason possibly make it back to the family he loves? The answers lie in a journey more wondrous and horrifying than anything he could’ve imagined—one that will force him to confront the darkest parts of himself even as he battles a terrifying, seemingly unbeatable foe.From the author of the bestselling Wayward Pines trilogy, Dark Matter is a brilliantly plotted tale that is at once sweeping and intimate, mind-bendingly strange and profoundly human—a relentlessly surprising science-fiction thriller about choices, paths not taken, and how far we’ll go to claim the lives we dream of.

A very clever and absorbing story that explains the 'what if' aspect of your life. Be careful what you wish for as it might come true and you'll realise the path you're on is the right one for you!Jason starts life in the book as a normal guy, with a wife and son embracing what he has, but wondering how life could have been different if things hadn't happened in the order they did. And when he goes off for a quick drink with a friend he is soon to discover how quickly all he thought he knew could change and how messed up life can become - especially if science and quantum physics are involved!There's a lot of science stuff that did go over my head - not that difficult to be fair! - but exploring the different versions of you/different realities of life was one that was so thought provoking and engaging that I just couldn't put this book down once I'd started it. As he finds himself battling himself in different guises, you can feel the regret in his actions of questioning where his life had led to, and how everything he once knew was what made him who he was as a person.I loved the character of Jason especially when he's discovering the numerous multiverses and trying to find a way back to his 'real life'. It's always so interesting to wonder if there is there are alternative realities out there, and how we would differ if we'd chosen different paths in life and this book really captured that uncertainty and fear of feeling out of control and not in charge of your own destiny.A fabulous, crazy,pulsating, entertaining read!