#BookReview Everything Under by Daisy Johnson #LibraryLoveChallenge 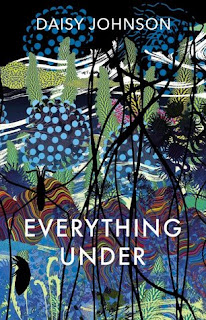 Words are important to Gretel, always have been. As a child, she lived on a canal boat with her mother, and together they invented a language that was just their own. She hasn’t seen her mother since the age of sixteen, though – almost a lifetime ago – and those memories have faded. Now Gretel works as a lexicographer, updating dictionary entries, which suits her solitary nature.A phone call from the hospital interrupts Gretel’s isolation and throws up questions from long ago. She begins to remember the private vocabulary of her childhood. She remembers other things, too: the wild years spent on the river; the strange, lonely boy who came to stay on the boat one winter; and the creature in the water – a canal thief? – swimming upstream, getting ever closer. In the end there will be nothing for Gretel to do but go back.Daisy Johnson’s debut novel turns classical myth on its head and takes readers to a modern-day England unfamiliar to most. As daring as it is moving, Everything Under is a story of family and identity, of fate, language, love and belonging that leaves you unsettled and unstrung.

I found this to be a dark and hypnotic read that is one of those books that gets you thinking and looking at things differently as you try and put yourself in the place of the main narrator as she tries to make sense of the world she knows now, and what she remembers of the past.With the story following different paths, I did find myself feeling a little confused and overwhelmed at times with the flow of the story and that did take away some of the enjoyment for me.It's the story of a mother and daughter, and how the daughter is now coping with her mother who is suffering from dementia and the frustrations that they both feel about the situation they find themselves in. She wants answers about her childhood but that isn't easy with a mother who is easily confused and dismissive.There are questions about mysterious names from the past, the relevance of the 'Bonak' by the river and a feeling of never feeling settled or part of anything because of how things were - i'm still not sure Gretel got the answers she wanted but she did start to make a little more sense out of her recollections and memories. This book had a really strong start but then did tail off a bit as things got a little more involved and confusing for the reader, but still made for an entertaining and thought provoking read.