#BookReview The Last Words of Madeleine Anderson by Helen Kitson 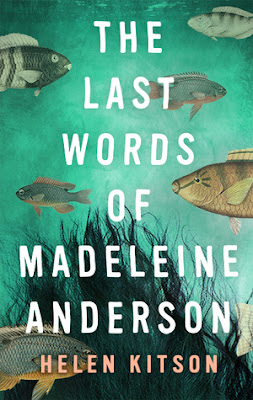 Once upon a time Gabrielle Price wrote and published an extraordinary novel. But twenty years on her literary star has dimmed, her "work of genius" is all but forgotten, and no further novels have materialized. She now lives an unremarkable life: middle-aged, living alone in the sleepy village she grew up in, and working as a housekeeper for the local vicar. Her lonely existence is dominated by memories of her best friend Madeleine, who died young, in tragic and mysterious circumstances. Gabrielle’s quiet world is turned upside down when she meets and befriends Simon – young, attractive, a would-be writer, and enthusiastic fan of the astonishing novel that Gabrielle published all those years ago. Charmed and flattered, she recklessly invites him into her home and her heart. But Simon is mysterious and manipulative, and it’s not long before he forces Gabrielle to confront the demons in her past. Gabrielle’s obsession begins to destroy her carefully cultivated life, and she comes to feel increasingly threatened by Simon’s presence. Who is he? Why did he seek her out? And what does he really want?

I will be forever grateful to the world of book blogging/reviewing for allowing me to read books that would normally pass me by - and that is exactly how I feel about this book which  had me well and truly spellbound from the moment I picked it up and I'm still thinking about the characters many hours later and cannot recommend it highly enough!

The character of Gabrielle Price is at the centre of this story - she's a writer and published a work of 'genius' many years earlier but nothing has followed since and she's never really settled or found her place in life.  Happy to be a housekeeper for the local vicar, she's content - or so she thought  - doing her own thing and keeping to herself.  But there's always been the death of her close friend - Madeleine - hanging over her and she is plagued by memories o their friendship and what could have been.  We get to read flashbacks of their time together through childhood and into their young adult life, when they both changed as people and different feelings bubbled up between them causing them to drift apart.

When Gabrielle receives a 'fan letter' from a young writer she is shocked that her book still has people taking notice of it, and agrees to meet this fan who turns out to be a young man named Simon, who claims to want to write his own book and is looking for advice and inspiration from her.

What follows is a tale of an older woman being secretly flattered by this attention and the hold that Simon begins to have over her is intoxicating.  She knows she should know better but just can't seem to help spending time with him and their friendship is soon the talk of the local village.

I found the strength of this book to be the attention to detail and the characters, who have been crafted so beautifully.  It's a slow burn of a novel which jumps seamlessly between the now and to the past when we get to explore the intricacies of being young  female friendships.  There is so much unknown about Simon but he has such a way with words that the story he tells Gabrielle allows her  to trust him and confides some of her darkest secrets to him.

A exhilarating book that is full of dark secrets, obsessive behaviour and mind games.  Stunning!!

My thanks to the publisher and author for the advanced reading copy in return for a fair and honest review.