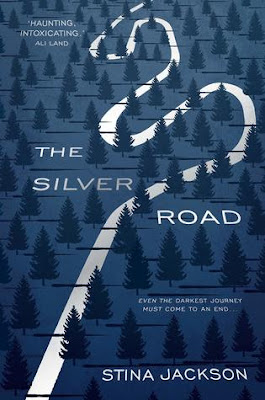 Three years ago, Lelle's daughter went missing in a remote part of Northern Sweden. Lelle has spent the intervening summers driving the Silver Road under the midnight sun, frantically searching for his lost daughter, for himself and for redemption.
Meanwhile, seventeen-year-old Meja arrives in town hoping for a fresh start. She is the same age as Lelle's daughter was - a girl on the brink of adulthood. But for Meja, there are dangers to be found in this isolated place.
As autumn's darkness slowly creeps in, Lelle and Meja's lives are intertwined in ways, both haunting and tragic, that they could never have imagined.
Published by Corvus
Purchase Links
hive.co.uk £10.55
waterstones £12.99
W H Smith  £9.35

I found this to be a totally absorbing and haunting story that was so deftly written that you could really sense the tension and angst of the characters throughout.

Lelle is a teacher and father who is haunted by the disappearance 3 years ago of his beloved daughter who he'd dropped off on The Silver Road to catch a bus - she never did and nobody has seen her since.  His desperation to find his daughter has caused the breakdown of his marriage, but he refuses to give up and constantly drives round the local area looking for clues or a suspect.

Meja is a young girl who has moved to the area with her mother Silje, but Meja is more sensible and responsible than her mother is and that pressure is getting to her, so when she is shown interest and kindness from Carl-Johan, whose family live nearby, her head is turned and all she can think of is him.  It's not long before she moves to where his family are - and to say they're a little odd is putting it mildly.  They are survivalists and trust nothing the government or authorities say, and they're very happy to live in this closed off world.  Even Meja has to give up her phone when she moves in with them.

Lelle is Meja's teacher so they form a bond through school and he can't help to feel protective towards her especially when her own mother doesn't seem to bothered.  Maybe he feels he needs to look out for Meja because he couldn't do more for his own daughter.  He feels frustrated at the police for not investigating her disappearance more and lives in a constant state of alert - his only purpose is to find out what has happened to his daughter.

From the setting to the storyline, I found this story to be one that was both beautifully written and well staged.  It was never rushed or too elaborate, and the slow burn of a couple of storylines really put doubt in your mind as a reader as to what could have happened and how such a disappearance affects the family left behind and the lengths some may go to in seeking out the truth.  A fascinating and gripping read.

I read this via The Pigeonhole app
Posted by Books and Me! at Friday, March 08, 2019