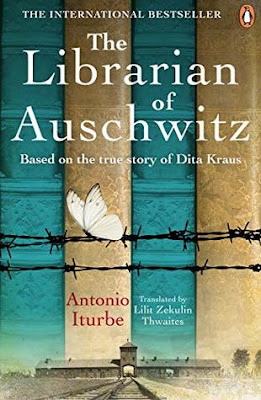 A huge delight for me to be part of the Blog Tour for this truly amazing book - THE LIBRARIAN OF AUSCHWITZ by ANTONION ITURBE. My thanks to the author, publisher and Tracy Fenton of Compulsive Readers for allowing me to be part of it all.

'It wasn’t an extensive library. In fact, it consisted of eight books and some of them were in poor condition. But they were books. In this incredibly dark place, they were a reminder of less sombre times, when words rang out more loudly than machine guns…’
Fourteen-year-old Dita is one of the many imprisoned by the Nazis at Auschwitz. Taken, along with her mother and father, from the Terezín ghetto in Prague, Dita is adjusting to the constant terror that is life in the camp. When Jewish leader Freddy Hirsch asks Dita to take charge of the eight precious books the prisoners have managed to smuggle past the guards, she agrees. And so Dita becomes the secret librarian of Auschwitz, responsible for the safekeeping of the small collection of titles, as well as the ‘living books’ - prisoners of Auschwitz who know certain books so well, they too can be ‘borrowed’ to educate the children in the camp.
But books are extremely dangerous. They make people think. And nowhere are they more dangerous than in Block 31 of Auschwitz, the children’s block, where the slightest transgression can result in execution, no matter how young the transgressor…
PUBLISHED BY EBURY PRESS
PURCHASE LINKS
Amazon UK
hive.co.uk
waterstones

MY REVIEW
Wow! What a book! I've seen the comparisons to The Tattooist of Auschwitz and, for me, I found this to be more compelling and more emotional in the way that the author conveys the brutality of the camps, alongside the beauty of the human spirit of those inside the camps. It never shies away from the horror and cruelty of the humans in charge at the Auschwitz camp - it isn't an easy read at times - but the human stories of people trying their best to survive and using books and each other as inspiration to keep going was truly touching and awe-inspiring and really helped you connect with the situation that those inside the camps had to face on a daily basis.

It begins with Alfred Hirsch who is inside the family camp and starts a school to help teach the youngsters in there although the few books they have are always hidden from the guards, as if they are found they are destroyed. He is helped by young Dita, aged 14, who is passionate about books and learning and takes it on herself to come up with ingenious ways to keep the books hidden. The importance of stories helps them all to escape the reality of day to day life in the camps and makes you realise just how important books can be.

As you follow the stories of these people, you get glimpses of life around the camp, the despicable characters who we all know from history, but also the brave actions of others which can often be forgotten by such a horrific period of history.  I connected more with the characters in this book  due to the way it was told - the human stories, the day to day routine - the fact that there was no escaping what was going on around them in the chambers but the fact that people had to keep hope for their children that they would get out and that they needed to keep learning for when that moment arrived.  How those people kept going is beyond me but the books and the community they built up seemed to give them all strength to carry on.

A brilliant and  emotional read and one I highly recommend to everyone.