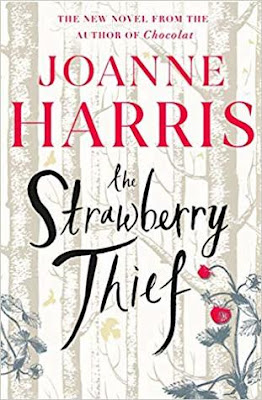 Extremely honoured to be taking part in the blog tour for THE STRAWBERRY THIEF by JOANNE HARRIS today, and my thanks to the author, publisher and Tracy Fenton for letting me be part of it all and to share my thoughts on this wonderful book!

Vianne Rocher has finally settled down. Lansquenet-sous-Tannes, the place that once rejected her, has become her home. With Rosette, her “special child”, she runs her chocolate shop in the square, talks to her friends on the river, is part of the community. Even Reynaud, the priest, has become a friend.

But when old Narcisse, the florist, dies, leaving a parcel of land to Rosette and a written confession to Reynaud, the life of the sleepy old village is once again thrown into disarray. The arrival of Narcisse’s relatives, the departure of an old friend and the opening of a mysterious new shop in place of the florist’s across the square – one that mirrors the chocolaterie, and has a strange appeal of its own – all seem to herald some kind of change: a confrontation, a turbulence. Perhaps, even, a murder…

Joanne Harris is an Anglo-French writer, whose books include fourteen novels, two cookbooks and many short stories. Her work is extremely diverse, covering aspects of magic realism, suspense, historical fiction, mythology and fantasy. In 2000, her 1999 novel CHOCOLAT was adapted to the screen, starring Juliette Binoche and Johnny Depp. CHOCOLAT has sold over a million copies in the UK alone and was a global bestseller. She is an Honorary Fellow of St Catherine’s College, Cambridge, and in 2013 was awarded an MBE by the Queen.

It's magical, it's beautifully written, it's emotional,  it's dark, it's heartbreaking.... I ADORED IT!!

We re-visit Vianne  and she is settled and still running her wonderful chocolate shop, with help from her daughter Rosette who is described as a 'special child' and who has made so many friends amongst the locals with her innocence and inquisitive nature.

One of her friends is Narcisse, the florist, and when he sadly dies and leaves Rosette her a plot of land in his will things begin to change for all of them. There's resentment from the relatives of Narcisse, and bewilderment from other locals and Vianne herself as to why he would do such a thing.  It all becomes much clearer as time goes on...

We get to enjoy this story from a number of perspectives - Vianne, Rosette are the main narrators but we also  hear the story of the local Priest who has also been left something by Narcisse which opens up a much darker side to the story and shows the impact of  living life with regrets and secrets.

The new arrival in the village also plays a big part in the relationship between Vianne and Rosette, as the curiousity of Rosette becomes too much for her to keep away despite her mum's warnings.

Rosette's story is entrancing. She knows she is different from the other children but that doesn't stop her following her heart and all she knows she has learnt from life and her experiences.  She doesn't speak but finds different ways to communicate her thoughts and fears and is such a gentle soul that you just warm to her immediately.  Obviously her mother is very protective towards her and sees the prejudices of others who don't understand her ways and often look down on her, so that makes her even more determined that life should remain as simple as possible for her sometimes that control just seems a little too smothering.

There was just so much to enjoy about this book!  I found it drew me in immediately and the different threads and ripples from events were all played out so well, alongside watching the different characters dealing with what they perceived as threats to their way of life and peace of mind.

It was an utter delight to read and I'm already itching to go back and read the whole Chocolat series all over again!