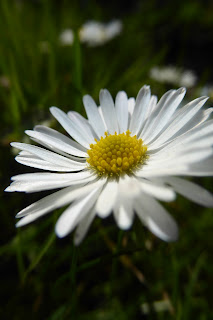 Hello! Yay for the weekend! Not so yay on the weather front though as it's turned chilly again so the winter coats are still required!  The colder temperatures has done wonders for the garden though as there's flowers all over the shop - and not enough rain to keep them all well watered!

Colder weather means more time indoors though so that's a good thing for the reading of books!  And it's been a very good reading week here with 6 books all finished (one of which was an audiobook) so very happy with that! It's been a good week for books arriving too (the postman hates me again!) but I have been restrained on Netgalley with just 2 newbies - although there really should be 0!!  Here's a quick run down of all things bookish....

The Duke and the Imposter by Michael Stolle - 3 stars
Engaging and fun historical mystery! Full review to follow on Blog Tour! 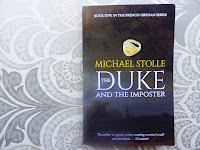 The Best of Crimes by K.C.Maher - 3 stars
Quirky and intriguing especially dealing with such a dangerous subject!

New York Times bestselling author Paula Brackston’s The Little Shop of Found Things was called “a page-turner that will no doubt leave readers eager for future series installments” (Publishers Weekly). Now, Brackston returns to the Found Things series with its sequel, Secrets of the Chocolate House.
After her adventures in the seventeenth century, Xanthe does her best to settle back into the rhythm of life in Marlborough. She tells herself she must forget about Samuel and leave him in the past where he belongs. With the help of her new friends, she does her best to move on, focusing instead on the success of her and Flora’s antique shop.
But there are still things waiting to be found, still injustices needing to be put right, still voices whispering to Xanthe from long ago about secrets wanting to be shared.
While looking for new stock for the shop, Xanthe hears the song of a copper chocolate pot. Soon after, she has an upsetting vision of Samuel in great danger, compelling her to make another journey to the past.
This time she'll meet her most dangerous adversary. This time her ability to travel to the past will be tested. This time she will discover her true destiny. Will that destiny allow her to return home? And will she be able to save Samuel when his own fate seems to be sealed?


DEAR LILY by DREW DAVIES
published by Bookouture - out May 2019

The must-read book of 2019! Equal parts heart-warming and heartbreaking, fans of Jojo Moyes, Eleanor Oliphant is Completely Fine and One Day in December will love this special novel by Drew Davies.
Dear Lily,
It’s me, Joy, your much wiser and (very slightly) older sister. I thought I’d start a new tradition of letter writing – now that we’re long distance.
On the plane over here, I began to cry in seat 21C. I think the magnitude of it finally hit me, after everything that happened…
I haven’t even unpacked yet – the only thing I’ve taken out of my suitcase is Harville, your beloved childhood teddy. Sorry for stealing him, but I need him more than you do. Every time I look at that little brown bear I think about our childhood. Remember that dance we made up to Annie’s ‘It’s a Hard Knock Life’? (Remember the broom choreography?)
I’m also sorry for abandoning you – I’ve always been your agony aunt, and a buffer in your infamous shouting matches with Mum. But I had to leave, Lily, I had to.
Anyway, I’m here now. I’m here to start over, and to face up to the past. I want to learn to laugh again, and to find someone to love who will maybe even love me back. You always told me I was just getting by, not actually living, so I’m finally doing it. Wish me luck, little sister.
Love,
Joy x
A beautiful book-club read for anyone who has ever hit rock bottom, longed for a fresh start, or needed to heal a broken, aching heart.

Nudge Magazine Premium Subscription Bundle - hardback edition
The lovely folk at Nudge Books recently tempted me with their Subscription Bundle as they  had a discount, where for a year you not only get their fab bookish magazine sent your way, but they also choose a book for you each month (you fill in a form so they can pick the right books for you!) and send it gift wrapped! I chose the 'Lucky Dip' option which  means you get fiction and non fiction mixed throughout the year and these were the first 2 books that arrived! 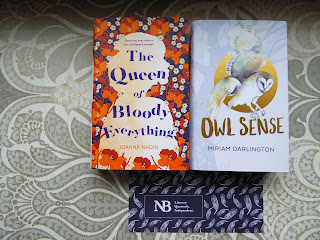 THE QUEEN OF BLOODY EVERYTHING by JOANNA NADIN
Have you ever wished for a different mother? Dido has...Dido Sylvia Jones is six years and twenty-seven days old when she moves from London squat to suburban Essex and promptly falls in love with Tom Trevelyan, the boy next door. It's not just Tom that Dido falls for, though: it's also his precocious sister, Harry, and their fastidious, controlling mother, Angela. Because Angela is everything that Edie—Dido's own mother—is not. And the Trevelyans are exactly the kind of family Dido dreams of: Normal.Dido wants to be normal more than anything else in the world. But it's the very thing that Edie can never be, as Dido—and the Trevelyans, including Dido's beloved Tom—will eventually learn the hard way.

OWL SENSE BY MIRIAM DARLINGTON
'Her softness took my breath away. Deadly beauty. She turned her face towards me. The owl's massive facial disc produces a funnel for sound that is the most effective in the animal kingdom'Owls have captivated the human imagination for millennia. We have fixated on this night hunter as predator, messenger, emblem of wisdom, something pretty to print on a tote bag or portent of doom. Darlington sets out to tell a new story. Her fieldwork begins with wild encounters in the British Isles and takes her to the frosted borders of the Arctic. In her watching and deep listening to the natural world, she cleaves myth from reality and will change the way you think of this magnificent creature. 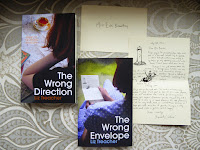 THE WRONG ENVELOPE -  Summer 1920. Two worlds are about to collide.
Evie Brunton loves her job. Twice a day, she spins along the narrow lanes of Devon on her bicycle, delivering letters from a heavy post bag. When the flamboyant London artist, Bernard Cavalier, drops like a meteor into her sleepy village, everything changes. Bernard is supposed to be painting for an important exhibition, but the countryside has its own charms, in particular his young post lady…Light and witty, and full of twists and turns, The Wrong Envelope is a charming romantic comedy. It captures the spirit of another age – when letters could change lives.

THE WRONG DIRECTION  A charming romantic comedy, set in 1920, 'The Wrong Direction' is the sequel to' The Wrong Envelope'. When Bernard Cavalier, a flamboyant London artist, marries Evie Brunton, a beautiful Devon post lady, everyone expects a happy ending. But Evie misses cycling down country lanes, delivering the mail, and is finding it hard to adapt to her new life among Mayfair’s high society. Meanwhile Bernard, now a well-known artist, is struggling to give up his bachelor ways.'The Wrong Direction' is as light and witty as 'The Wrong Envelope', with racy characters and a fast-paced plot. Wild parties, flirtatious models, jealous friends – Bernard and Evie must negotiate many twists and turns if they are to hold on to each other…

Those Who Are Loved is set against the backdrop of the German occupation of Greece, the subsequent civil war and a military dictatorship, all of which left deep scars.Themis is part of a family bitterly divided by politics and, as a young woman, her fury with those who have collaborated with the Nazis, drives her to fight for the communists. She is eventually imprisoned on the notorious islands of exile, Makronisos and Trikeri, and has to make a life or death decision. She is proud of having fought, but for the rest of her life is haunted by some of her actions. Forty years after the end of the civil war, she finally achieves catharsis.Victoria Hislop sheds light on the complexity of Greece’s traumatic past and weaves it into the dynamic tale of a woman who is both hero and villain, and her lifelong fight for justice.


The Soul of Kindness by Elizabeth Taylor

Daughter of the House by Victoria Cornwall 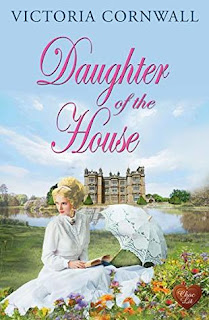 All done! How has your bookish week been? Good? Bad? I hope the week ahead is a good bookish one!