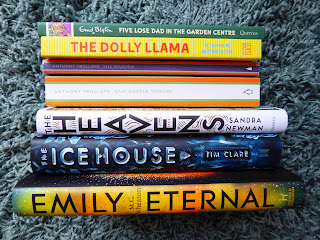 The 'getting older' part of having a birthday may not be so fun, but the cake and the bookish gifts are definitely a bonus!!  And I've been very lucky again on the pressie front from family and friends, so thought I'd share the results of a mini spree with some book vouchers, alongside some books bought by friends and a rather gorgeous bookish bag that I got!  And I still have book vouchers still to spend, so hopefully I can add a part 2 to my birthday bookhaul sooner rather than later! 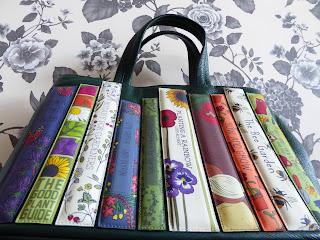 My Yoshi Green Fingers Bookworm Bag!
The lovely company of Yoshi are becoming very well known for their bookish themed bags, and as a very keen gardener how could I not resist adding this to my bag collection!!

EMILY ETERNAL by M.G.WHEATON
Really like the sound of this - and the cover is pretty special too! 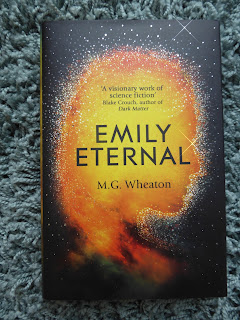 Meet Emily - she can solve advanced mathematical problems, unlock the mind's deepest secrets and even fix your truck's air con, but unfortunately, she can't restart the Sun.She's an artificial consciousness, designed in a lab to help humans process trauma, which is particularly helpful when the sun begins to die 5 billion years before scientists agreed it was supposed to.So, her beloved human race is screwed, and so is Emily. That is, until she finds a potential answer buried deep in the human genome. But before her solution can be tested, her lab is brutally attacked, and Emily is forced to go on the run with two human companions - college student Jason and small-town Sheriff, Mayra.As the sun's death draws near, Emily and her friends must race against time to save humanity. But before long it becomes clear that it's not only the species at stake, but also that which makes us most human.

THE ICE HOUSE by TIM CLARE
Such a beautiful cover! I had to have it! 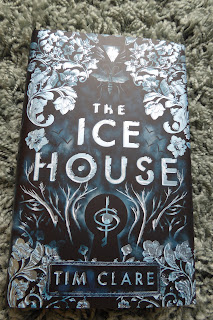 WAR DOESN'T END. IT SLEEPS.Delphine Venner is old, but she remembers everything.She remembers what it is to be a child of war, she remembers fighting for her life and what the terrifying creatures from another world took from her all those years ago. She remembers the gateway, and those she lost.And in that other world, beast-filled and brutal, someone waits for her. Hagar, a centuries-old assassin, daily paying a terrible price for her unending youth, is planning one final death: that of her master, the Grand-Duc. A death that will cost her everything. A death that requires Delphine.Voyaging into this violence and chaos, Delphine must remember who she really is and be ready to fight, before war reawakens. But in the battle to destroy an ageless evil, will both worlds be saved - or will every mortal creature lose everything?

THE HEAVENS  by SANDRA NEWMAN
Stick gold on a cover.... I want it!

A work of rare literary brilliance and emotional power, The Heavens is a mesmerizing novel of love and time, of dreams and politics, that asks how we come to inhabit our world New York, late summer, 2000. A party in a spacious Manhattan apartment, hosted by a wealthy young activist. Dozens of idealistic twenty-somethings have impassioned conversations over takeout dumplings and champagne. The evening shines with the heady optimism of a progressive new millennium. A young man, Ben, meets a young woman, Kate—and they begin to fall in love.From their first meeting, Ben knows Kate is unworldly and fanciful, so at first he isn’t that concerned when she tells him about the recurring dream she’s had since childhood. In the dream, she’s transported to the past, where she lives a second life as Emilia, the mistress of a nobleman in Elizabethan England.But for Kate, the dream becomes increasingly real and compelling until it threatens to overwhelm her life. And soon she’s waking from it to find the world changed—pictures on her wall she doesn’t recognize, new buildings in the neighborhood that have sprung up overnight. As she tries to make sense of what’s happening, Ben worries the woman he’s fallen in love with is losing her grip on reality.Transporting the reader between a richly detailed past and a frighteningly possible future, The Heavens is a powerful reminder of the consequences of our actions, a poignant testament to how the people we love are destined to change, and a masterful exploration of the power of dreams.

THE WARDEN & BARCHESTER TOWERS by ANTHONY TROLLOPE
I've never read anything from this author but I've heard good things and was seduced by these Penguin editions! 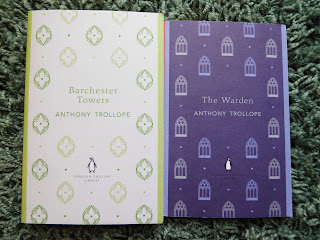 Trollope's witty, satirical story of a quiet cathedral town shaken by scandal - as the traditional values of Septimus Harding are attacked by zealous reformers and ruthless newspapers - is a drama of conscience that pits individual integrity against worldly ambition.

In The Warden Anthony Trollope brought the fictional county of Barsetshire to life, peopled by a cast of brilliantly realised characters that have made him among the supreme chroniclers of the minutiae of Victorian England. It is the first book in the Chronicles of Barsetshire.

Trollope's comic masterpiece of plotting and backstabbing opens as the Bishop of Barchester lies on his deathbed. Soon a pitched battle breaks out over who will take power, involving, among others, the zealous reformer Dr Proudie, his fiendish wife and the unctuous schemer Obadiah Slope.

THE DOLLY LLAMA by STEPHEN MORRISON
present from a friend! 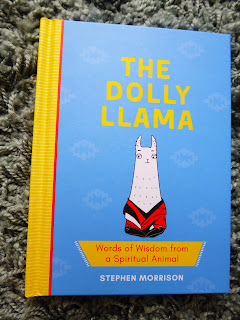 Meet the Dolly Llama, the world’s first behooved spiritual leader, as he shares his words of wisdom and teachings for the first time.  Llama Karma lies within you! In this gem of a book, his holiness the Dolly Llama offers spiritual guidance and shows you how to bring peace, compassion, and “cuditation” (a blend of chewing and meditation) into your everyday life. Drawing inspiration from “the four bales of wisdom,” which have helped many grazer-browsers before him on the rocky path of life, he helps you harness inner calm—and cope with everyday problems like hoof infection. This guide is perfect for anyone who loves llamas, animals, and spiritualism . . . and has a good sense of humor!


FIVE LOSE DAD IN THE GARDEN CENTRE by BRUNO VINCENT
present from a friend! 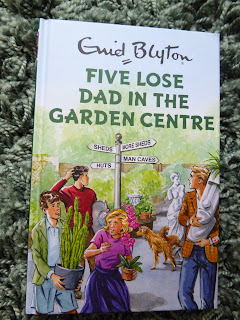 Enid Blyton's books are beloved the world over and The Famous Five have been the perennial favourite of her fans. Now, in this new series of Enid Blyton for Grown-Ups, George, Dick, Anne, Julian and Timmy are keen to show Uncle Quentin what a jolly good chap he is.
Join Julian, George, Dick, Anne and Timmy the dog as they celebrate Father's Day by taking Uncle Quentin to the local garden centre to chose a new garden shed in which to conduct his experiments. But what promised to be a relaxed outing turns into a nightmare when Quentin disappears into thin air. He surely cannot have gone far