#BlogTour The Duke and the Imposter by Michael Stolle @Bookollective 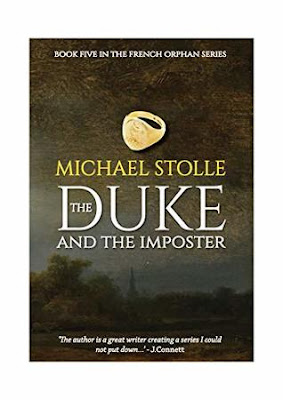 Delighted to be taking part in the Blog Tour for THE DUKE AND THE IMPOSTER by MICHAEL STOLLE - and my thanks to the author, publisher and Bookollective for putting it all together and letting me be part of it all!

It's a beautiful day in the seventeenth century. Pierre, Marquis de Beauvoir, Duke of Hertford and his small family arrive for a picnic on the banks of the River Loire in the grounds of his castle of Montrésor. It is a garden Eden - beautiful and peaceful. But fate strikes and, taken by surprise, the lunch party is ambushed.

Pierre is found later by his faithful valet, barely clinging to life, but his wife and only son have vanished without a trace. Beyond consolation, Pierre is convinced that his family has been annihilated. Luckily his friends François and Armand rush to the castle from Paris to his aid - and to investigate.

The quest leads to the coast of France and then on to the shores of England, a country torn apart by old loyalties to the Stuart king and the rise of the new Puritan gentry.

As the friends come closer and closer to the viper's nest they must find out the truth, and track down the mastermind behind the ambush, who is prepared to stop at nothing until he has taken Pierre's place and styled himself the next Duke of Hertford. A man not known to take prisoners. Soon Pierre and his friends are not only fighting against an enemy who's ruthless and vile, they're racing against time, the biggest enemy of all.

This is the 5th book in this series, but my 1st so don't worry about not having read any of the others! It's really easy to get in to and is a great mix of history and mystery, so plenty to keep you engaged and entertained from page one to the last!

Set in 17th Century England and France, you follow the story of Pierre who is in pain and struggling to remember what happened to his family while they were out having a picnic. With no sign of his wife and child he fears the worst, but calls in his friends Francois and Armand to help try and figure out what happened and how to find out if his family are alright.

As Francois and Armand start to question those around, they soon uncover sinister goings on and then have a race against time to track Marie and her son down before it is too late.

I enjoyed the duo of Francois and Armand as they would often bicker and were very funny together but they had great detective skills between them! They used their contacts in London well and it was quite good fun trying to work out who they should trust. I also like the way the story was switched too from Marie's point of view as it showed her being so brave for her son despite not knowing what was really going on.  It soon becomes clear why they wanted the young son so badly and why they went to the lengths they did to grab him and a lot is uncovered in clandestine meetings back in London that really get to the bottom of the plot against the family.

Set in the time of Cromwell and King Charles I, England was in turmoil so there's always plenty going on and lots to explore in how people were behaving at that time,  and I just enjoyed the quick pace of the story, the engaging characters and a fascinating period of history!