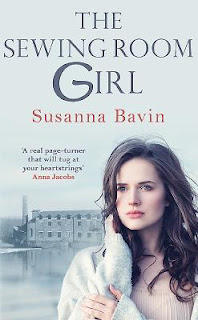 Hugely excited to be the next stop on the Blog Tour for this wonderful book - THE SEWING ROOM GIRL by SUSANNA BAVIN - and my thanks to Lesley at Allison & Busby for the copy of the book and letting me be part of it all!

 The third book from an exciting new voice in historical sagas
 A keen sense of the North West of England in the late nineteenth century, from working-class communities to more well-to-do suburbs, subtle characterisation and gripping plot
 Perfect for fans of Anna Jacobs, Lyn Andrews and Nadine Dorries

1892. When her beloved father dies, Juliet and her mother, the difficult but vulnerable Agnes, are left to fend for themselves. When Agnes lands a job as a seamstress for a titled family, things appear to be looking up. But just as the pair begin to find their feet, Juliet finds herself defenceless and alone. Without her mother to protect her, Juliet becomes the victim of a traumatic incident and is left to face an impossible dilemma. She flees to Manchester seeking support from her estranged family but comes up against her formidable grandmother, who is determined to bend Juliet to her will. It will take all Juliet’s ingenuity to escape the clutches of her ruthless grandmother and make her own way in life. 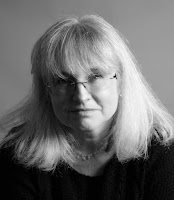 Susanna Bavin has variously been a librarian, an infant school teacher, a carer and a cook. She lives in Llandudno in North Wales with her husband and two rescue cats, but her writing is inspired by her Mancunian roots.

Also delighted to be able to share this giveaway today for you to win a set of books from Susanna Bavin - 3 paperbacks and 1 hardback! A prize well worth winning! Click the link below to add your entry!! GOOD LUCK!! 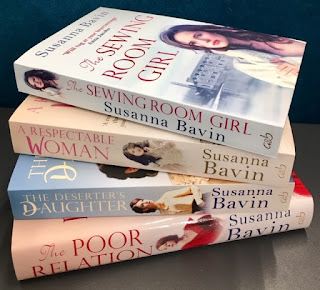 This is the 3rd book from Susanna Bavin, and my 1st read of one of hers and I'm now excited to go back and read her other titles as I found this to be captivating, heartbreaking  and such a wonderful read following the story of Juliet - and my heart broke for her many times throughout!!  She is one of those characters who has a heart of gold but life seems to have such a downer on her - but she's full of determination and such a hard worker that you find yourself cheering on every success and happy moment she gets to encounter.

Juliet has a tough life ahead of her, especially after losing her father so she and her mother have to move and fend for themselves.  Agnes finds work as a seamstress for a titled family and Juliet begins to work too, but life doesn't seem to be getting any easier for them, Juliet especially and she soon finds herself alone, picked on by other girls in the sewing room and working for the most loathsome character.  But she does find an ally in Hal, who is working in the garden and builds up quite the friendship to the displeasure of others, who want to put as much distance as they can between the two.

Whatever Juliet faces, she never crumbles!  And for that she is a total heroine!  She has so much responsibility on her shoulders from the start and  a heart of gold but people who come into her life seem to just treat her like dirt and take advantage of her.  Even members of her own family aren't the most pleasant characters in the way they treat her, but she finds solace in her work and is remarkably tough and I think the creative side of dress making gives her an escape from the misery she has endured.

Set in the 1890's, I found this to be such a gratifying read and a main character who is difficult to be forgotten! She endures such horrific actions throughout, but her spirit is never broken and that is something to be admired! 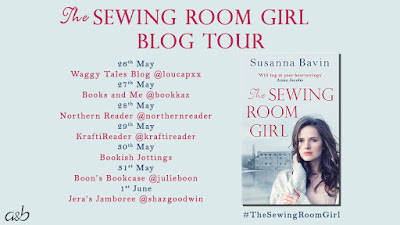