#BookReview From The Wreck by Jane Rawson 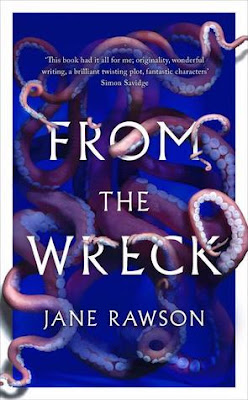 When George Hills was pulled from the wreck of the steamship Admella, he carried with him memories of a disaster that claimed the lives of almost every other soul on board. Almost every other soul.Because as he clung onto the wreck, George wasn’t alone: someone else – or something else – kept George warm and bound him to life. Why didn’t he die, as so many others did, half-submerged in the freezing Southern Ocean? And what happened to his fellow survivor, the woman who seemed to vanish into thin air?George will live out the rest of his life obsessed with finding the answers to these questions. He will marry, father children, but never quite let go of the feeling that something else came out of the ocean that day, something that has been watching him ever since. The question of what this creature might want from him – his life? His first-born? To simply return home? – will pursue him, and call him back to the ocean again.Blending genres, perspectives and worlds, Jane Rawson’s From the Wreck - winner of the Aurealis Award for Best Science Fiction Novel- is a chilling and tender story about how fiercely we cling to life, and how no-one can survive on their own.

Bonkers but enthralling!! My kind of book!! It's one of those books that you are never really sure where the story is going to take you, but you'll have fun figuring it all out and making sense of it all while you're in the heads of these wonderful characters, and just enjoying the pure escapism and emotion of it all - enjoy the ride!

The main character is George and he is reliving his extraordinary encounter with a woman who kept him alive on a shipwreck - and who promptly disappeared afterwards and he can't shake her from his mind. It affects his day to day life as he tries to track her down as he is convinced there is more to her than meets the eye! It charts his marriage and time as a father and we also get the story from one of his son's point of view - Henry - who has a rather strange birthmark , and a very strange relationship with it!!

It's a curious mix of historical fiction and science fiction, but works so well as the Author has great fun and freedom with taking a real life event and adding a totally unique spin on things and playing with the emotions of a man who had survived a traumatic event but was left with so many unanswered questions and just couldn't settle or appreciate his life until he got the answers he was looking for. The struggles he had with coming to terms with what happened to him was clear to see and the fact that he couldn't really explain his experience what he went through really added to his trauma and showed just how much he needed to make sense of it all.