#BookReview The Heavens by Sandra Newman 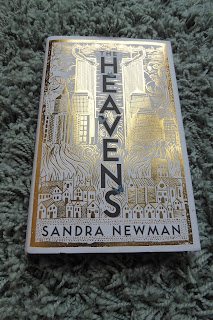 A work of rare literary brilliance and emotional power, The Heavens is a mesmerizing novel of love and time, of dreams and politics, that asks how we come to inhabit our world New York, late summer, 2000. A party in a spacious Manhattan apartment, hosted by a wealthy young activist. Dozens of idealistic twenty-somethings have impassioned conversations over takeout dumplings and champagne. The evening shines with the heady optimism of a progressive new millennium. A young man, Ben, meets a young woman, Kate—and they begin to fall in love.From their first meeting, Ben knows Kate is unworldly and fanciful, so at first he isn’t that concerned when she tells him about the recurring dream she’s had since childhood. In the dream, she’s transported to the past, where she lives a second life as Emilia, the mistress of a nobleman in Elizabethan England.But for Kate, the dream becomes increasingly real and compelling until it threatens to overwhelm her life. And soon she’s waking from it to find the world changed—pictures on her wall she doesn’t recognize, new buildings in the neighborhood that have sprung up overnight. As she tries to make sense of what’s happening, Ben worries the woman he’s fallen in love with is losing her grip on reality.Transporting the reader between a richly detailed past and a frighteningly possible future, The Heavens is a powerful reminder of the consequences of our actions, a poignant testament to how the people we love are destined to change, and a masterful exploration of the power of dreams.

The shiniest of gold covers - I'm in love!!And as for the contents of the book, it's one of those that I think leaves you thinking more once you've finished it as you process what you've just experienced as that is how it has made me feel! I thoroughly enjoyed the story of Kate who is a dreamer - literally! - and seems to drift through her life with no real purpose, other than to interpret the dreams she has as her own personal quest to help save the world! If that sounds mad it is, but the way the book is written leaves it up to the reader to decide if her dreams of her life as Emilia back in the 16th Century in London are just in her head, or actually real. When she wakes she's always back in New York in the year 2000 and her life is 'happy' as she describes it, but not fulfilling. Her friends are all used to her ways but when she starts to return from her dreams and forgets things that have happened, they get frustrated with her and worry if she's sick .The relationship with Ben in New York is the thing that makes her dreams seemingly more vivid and real - her senses are more heightened when she's in love or dealing with a broken heart. He adores her and will always find excuses for her behaviour but soon his patience begins to wear out.She is convinced that when she is back in the 16th century, when she meets fellow time traveller William Shakespeare, that she must do something to stop bad things happening in the future. Everytime she returns to the 'now' something has changed and she's convinced it is because of something she did back in the other timeline - the butterfly effect. The more she drifts along, the more her friends question her sanity and the more she questions her own purpose and place in the world that she finds herself in, especially when the 'dream' world seems so real to her.I enjoyed the 'now' timeline more than going back in time as I just felt more connection with her as a character in those sequence of events as it was more compelling as you watched her become more detached from everything she knew.A book that makes you ponder and such an intriguing story that is quirky and just that little bit different.