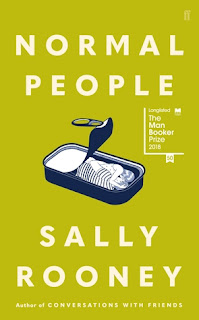 At school Connell and Marianne pretend not to know each other. He’s popular and well-adjusted, star of the school soccer team while she is lonely, proud, and intensely private. But when Connell comes to pick his mother up from her housekeeping job at Marianne’s house, a strange and indelible connection grows between the two teenagers—one they are determined to conceal.

A year later, they’re both studying at Trinity College in Dublin. Marianne has found her feet in a new social world while Connell hangs at the sidelines, shy and uncertain. Throughout their years in college, Marianne and Connell circle one another, straying toward other people and possibilities but always magnetically, irresistibly drawn back together. Then, as she veers into self-destruction and he begins to search for meaning elsewhere, each must confront how far they are willing to go to save the other.

Sally Rooney brings her brilliant psychological acuity and perfectly spare prose to a story that explores the subtleties of class, the electricity of first love, and the complex entanglements of family and friendship.

An enjoyable read BUT not one that blew me away or had the characters that will stay with me now I've finished reading it - it just didn't work for me and once again I'm left to wonder what I'm missing from a book that won so many plaudits!It's a love and life story - set over many years between Marianne and Connell who meet at school. He's the popular kid, she's the weird one with no friends but they have a connection and meet in secret getting closer and closer. They are from very different bakcgrounds too - she from a wealthy family, his mother cleans for them - but their friendsip seems to work for them, even though it's kept a secret from those at school and those around them.The story then follows them to college where the roles are reversed - she finds 'her people' and fits in better than he does. Their relationship is still an on and off thing - they both have other relationships in between but always find their way back to one another. Definitely seems to be a case of 'can't live with, can't live without' for them both!Her troubled family life seems to be a big part of how she feels about herself throughout but isn't really mentioned much which I would have liked - her brother abuses her, her mother seems to hate her, she gets more affection from the cleaner!And Connell goes through some very dark times too dealing with various issues but it kind of all just felt a little flat and easily dealt with when he confronts them! I liked the fact that they were always there when needed to help one another but it did all feel a little too safe at times.