Hello! Happy bank holiday weekend - if you are in the UK that is!  And the weather looks like it might be shockingly bad, so good news if you want to get a lot of reading done!!

Speaking of reading, and shockingly bad, that is my verdict on my own attempts at reading this week! I don't know what has happened - whether I've hit a reading slump, or just found myself distracted by other things, but I've only managed to read ONE book this week!!!! This is not good news on any front, but with books piling up again on the bookshelves I can't allow it to happen again!!  And a few new books have appeared from various means this week too - it's all beginning to spiral way out of control once more....aarrggghh!

On the plus side there was NO visits to Netgalley so at least I've not added to that bookshelf, and I got to meet the lovely author Syd Moore as she held a book signing at the local Waterstones for the release of her latest - Strange Tombs - so that was a wonderful experience! We don't get many book signings local to us so it made for a  nice change! 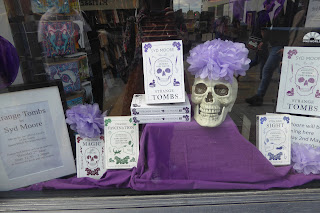 On to the bookish side of my week!!

Creepy, dark and gruesome - loved it!! Just don't read it at bedtime!

STRANGE TOMBS by SYD MOORE
from the book signing! And book 4 in the Essex Witch Museum Mystery series! 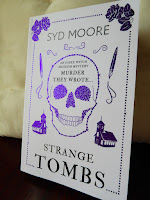 Halloween in Essex, and things are going well for the writers on the Mystery and Suspense course at old Ratchette Hall. Things however take a turn for the downright nasty when early on All Saints Day the course administrator is discovered dead in the hall. Lips drawn back, eyes wide open, his face a mask of utter terror, it looks to all intents and purposes that Graham has been scared to death. When he is found to be clutching a cold stone finger the writers are thrown into confusion and fear, convinced the long dead knights have claimed his soul. But how could the marble effigies have come back to life on Halloween? And why would anyone, dead or alive, want to kill mild-mannered Graham? There is only one way to get to the bottom of the mystery and the Essex Witch Museum investigators are quickly drafted in. Very soon, however, Rosie and Sam realise not everything, and everyone are what they seem at Ratchette Hall, appearances can be deceiving, someone certainly has a grudge. As their investigation progresses they find more questions than answers: who is making the unearthly howling noises late into the night? What is the strange glimmering glimpsed in the woods about the Hall? Why is one of the church crusaders missing a finger? And what of the enigma of the ancient empty tomb? When another one of the writers turns up dead Rosie and Sam realise strange forces are at play. The pair must use their experience of folklore, mystery and magic as well as their wits to solve the mystery before the body count grows.


HAVERSCROFT by S.A.HARRIS
Treated myself from the Salt Publishing website! 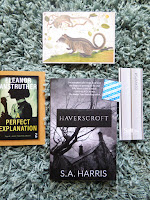 Kate Keeling leaves all she knows and moves to Haverscroft House in an attempt to salvage her marriage. Little does she realise, Haverscroft’s dark secrets will drive her to question her sanity, her husband and fatally engulf her family unless she can stop the past repeating itself. Can Kate keep her children safe and escape Haverscroft in time, even if it will end her marriage?Haverscroft is a gripping and chilling dark tale, a modern ghost story that will keep you turning its pages late into the night.


WHERE TO FIND ME by ALBA ARIKHA
from Alma Books 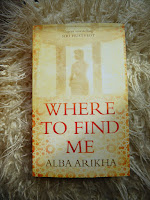 It’s 1985, and Joe Stone is excited to be joining his old school friend, and lifelong crush, Chris, for a long weekend in London’s Soho—home to a vibrant, developing gay scene, and a million miles from the small town Joe and Chris grew up in.

But when Chris is brutally murdered, the police just write his death off as another rent boy fallen foul of a bad hook up. Joe realises that his best friend was killed deliberately, and joins forces with former police detective, Russell Dixon—Chris’s flatmate—to find out why.

Spiralling debt, illicit sex, blackmail, spurned lovers and hard-nosed gangsters all play their part, but who among the celebrities, fashionistas, drag queens, ex-lovers and so-called friends is Chris’s killer?

A noirish whodunit set in 1980s London, with all the big hair, electro-pop, shoulder pads, police discrimination and lethal killers that the era had to offer.

TAINTED LOVE IS THE FIRST BOOK IN THE SOHO NOIR SERIES OF COZY CRIME NOVELLAS.

THE SEWING ROOM GIRL by SUSANNA BAVIN
copy from publisher for review. 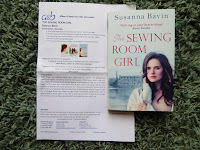 Born into service, sixteen-year-old Juliet Harper has always idolized her mother, Agnes. But Agnes is haunted by what could have been, and the glamorous life she might have lived if she stayed in Manchester rather than settling down in the Lancashire moorland with her husband.Life takes another unexpected turn when Juliet's father suddenly dies. Agnes's reputation as a seamstress leads to her being taken on by local landowners the Drysdales, where she is proud to work. But it will be a bumpy road for both of them as they settle in to their new lives. Will Juliet ever be able to choose her own path? And what will become of them when Agnes falls ill?


THE SPACE BETWEEN TIME by CHARLIE LAIDLAW
copy received ahead of Blog Tour. Published in June 2019. 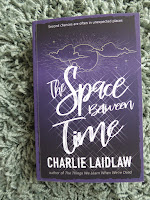 There are more stars in the universe than there are grains of sand on Earth...
Emma Maria Rossini appears to be the luckiest girl in the world. She's the daughter of a beautiful and loving mother, and her father is one of the most famous film actors of his generation. She's also the granddaughter of a rather eccentric and obscure Italian astrophysicist.
But as her seemingly charmed life begins to unravel, and Emma experiences love and tragedy, she ultimately finds solace in her once-derided grandfather's Theorem on the universe.
The Space Between Time is humorous and poignant and offers the metaphor that we are all connected, even to those we have loved and not quite lost. 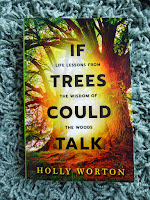 All trees have a story.

Holly Worton has spent the last few years talking to trees – the birches, the oaks, the beeches and the sycamores.
You’re probably wondering:  How is it that trees can talk?  Is this for real?
Trees are living, breathing organisms which humans are able to connect and talk to on a deeper level through silent, telepathic communication.
Trees have a much broader perspective on life compared to humans.  Trees can live hundreds and even thousands of years.
This means Trees have thousands of years of wisdom that we’re able to tap into.  Talking to the trees can bring us back to our true selves and can reflect back to us the things we need to see in ourselves.  It can also be a space for deep healing.
Living in the technology age, however, we spend our lives connected to computers, mobile phones, and video games. Consequently, we've become increasingly disconnected from ourselves and from Nature.
This book is meant to gently encourage you to get back to Nature and turn to the magic and the wisdom of the trees. By reconnecting to Nature, you can improve your relationship with yourself, which will help you make better, more aligned choices in your life.

A BAKERY AT THE LITTLE DUCK POND CAFE by ROSIE GREEN

So now I need to kick myself up the butt to get me back in the reading mode again and hope this was just a temporary blip and not something that is going to last a while longer!