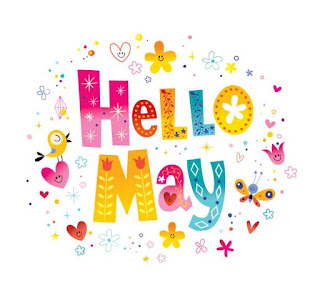 Aarrggghh - how is it May already?! Only seemed like yesterday the Christmas tree was up!!  And I still don't feel very organised on the reading front despite my best efforts!  Compiling these lists is helping 'a little' as it's making me more focused (at least in the 'making lists' part!!) so another busy month ahead it seems despite having already started on the May Blog Tour books - and having a little bit of a splurge on the book buying front recently means I need to start reading the books I'm buying a little more!!

Here's what I'm hoping to get to this month...

Cressy has grown up in a world of women, presided over by her eccentric, artistic grandfather Harry Bretton. Rebelling against the wholesome, organic values of her home life, Cressy decides to leave home in search of more ephemeral pleasures. Taking a job in an antiques shop, she meets David, a self-satisfied journalist, also looking for means of fleeing the family nest. But as Cressy cannot fend for herself and David is securely tied to his mother's apron strings, this act of escape for both of them proves a powerful form of bondage. This quietly ironic exploration of the invisible shackles that tie children to parents is one of Elizabeth Taylor's most ambitious novels.

Ellie's dreams of opening a bakery in Sunnybrook are coming true and best friends Fen and Jaz are happily rallying round, helping her to plan a fabulous grand opening day. Everything in their garden seems to be rosy - until the arrival of a newcomer brings chaos to the village and tests relationships to the limit. Can the bakery succeed in the face of such upheaval? And more importantly, can firm friendships survive?

PINK ICE CREAMS by JO WOOLASTON
ahead of the Blog Tour

Intent on fixing her broken marriage and the alcohol-fuelled catastrophe that is her life, Kay Harris arrives at her grim and grey holiday let, ready to lay to rest the tragedy that has governed her entire adulthood – the disappearance of her little brother, Adam.

But the road to recovery is pitted with the pot-holes of her own poor choices, and it isn’t long before Kay is forced to accept that maybe she doesn’t deserve the retribution she seeks. Will the intervention of strangers help her find the answers she needs to move on from her past, or will she always be stuck on the hard shoulder with no clear view ahead and a glove box full of empties?

Pink Ice Creams is a tale of loss, self-destruction, and clinging on to the scraps of the long-lost when everyone else has given up hope.


THE WRONG DIRECTION by LIZ TREACHER
ahead of the blog tour

A charming romantic comedy, set in 1920, 'The Wrong Direction' is the sequel to' The Wrong Envelope'. When Bernard Cavalier, a flamboyant London artist, marries Evie Brunton, a beautiful Devon post lady, everyone expects a happy ending. But Evie misses cycling down country lanes, delivering the mail, and is finding it hard to adapt to her new life among Mayfair’s high society. Meanwhile Bernard, now a well-known artist, is struggling to give up his bachelor ways.'The Wrong Direction' is as light and witty as 'The Wrong Envelope', with racy characters and a fast-paced plot. Wild parties, flirtatious models, jealous friends – Bernard and Evie must negotiate many twists and turns if they are to hold on to each other…

Born into service, sixteen-year-old Juliet Harper has always idolized her mother, Agnes. But Agnes is haunted by what could have been, and the glamorous life she might have lived if she stayed in Manchester rather than settling down in the Lancashire moorland with her husband.Life takes another unexpected turn when Juliet's father suddenly dies. Agnes's reputation as a seamstress leads to her being taken on by local landowners the Drysdales, where she is proud to work. But it will be a bumpy road for both of them as they settle in to their new lives. Will Juliet ever be able to choose her own path? And what will become of them when Agnes falls ill?

THE GARDEN OF LOST AND FOUND by HARRIET EVANS

Nightingale House, 1919. Liddy Horner discovers her husband, the world-famous artist Sir Edward Horner, burning his best-known painting The Garden of Lost and Found days before his sudden death.Nightingale House was the Horner family's beloved home - a gem of design created to inspire happiness - and it was here Ned painted 'The Garden of Lost and Found', capturing his children on a perfect day, playing in the rambling Eden he and Liddy made for them.One magical moment. Before it all came tumbling down...When Ned and Liddy's great-granddaughter Juliet is sent the key to Nightingale House, she opens the door onto a forgotten world. The house holds its mysteries close but she is in search of answers. For who would choose to destroy what they love most? Whether Ned's masterpiece - or, in Juliet's case, her own children's happiness.Something shattered this corner of paradise. But what?

THE WESTERN WIND by SAMANTHA HARVEY

15th century Oakham, in Somerset; a tiny village cut off by a big river with no bridge. When a man is swept away by the river in the early hours of Shrove Saturday, an explanation has to be found: accident, suicide or murder? The village priest, John Reve, is privy to many secrets in his role as confessor. But will he be able to unravel what happened to the victim, Thomas Newman, the wealthiest, most capable and industrious man in the village? And what will happen if he can’t?Moving back in time towards the moment of Thomas Newman’s death, the story is related by Reve – an extraordinary creation, a patient shepherd to his wayward flock, and a man with secrets of his own to keep. Through his eyes, and his indelible voice, Harvey creates a medieval world entirely tangible in its immediacy.

Kate Keeling leaves all she knows and moves to Haverscroft House in an attempt to salvage her marriage. Little does she realise, Haverscroft’s dark secrets will drive her to question her sanity, her husband and fatally engulf her family unless she can stop the past repeating itself. Can Kate keep her children safe and escape Haverscroft in time, even if it will end her marriage?Haverscroft is a gripping and chilling dark tale, a modern ghost story that will keep you turning its pages late into the night.

The hardest lies to spot are the ones we tell ourselves.Dr Ruth Hartland rises to difficult tasks. She is the director of a highly respected trauma therapy unit. She is confident, capable and excellent at her job. Today she is preoccupied by her son Tom's disappearance.So when a new patient arrives at the unit - a young man who looks shockingly like Tom - she is floored.As a therapist, Ruth knows exactly what she should do in the best interests of her client, but as a mother she makes a very different choice - a decision that will have profound consequences.

FROM THE WRECK by JANE RAWSON

When George Hills was pulled from the wreck of the steamship Admella, he carried with him memories of a disaster that claimed the lives of almost every other soul on board. Almost every other soul.Because as he clung onto the wreck, George wasn’t alone: someone else – or something else – kept George warm and bound him to life. Why didn’t he die, as so many others did, half-submerged in the freezing Southern Ocean? And what happened to his fellow survivor, the woman who seemed to vanish into thin air?George will live out the rest of his life obsessed with finding the answers to these questions. He will marry, father children, but never quite let go of the feeling that something else came out of the ocean that day, something that has been watching him ever since. The question of what this creature might want from him – his life? His first-born? To simply return home? – will pursue him, and call him back to the ocean again.Blending genres, perspectives and worlds, Jane Rawson’s From the Wreck - winner of the Aurealis Award for Best Science Fiction Novel- is a chilling and tender story about how fiercely we cling to life, and how no-one can survive on their own.

So what do you make of that little lot then?! These are my 'priority' reads so hopefully I can get through all of them and still have time for a few little random picks too this month.....