#BlogTour The Best of Crimes by K.C.Maher @RedDoorBooks #BookReview 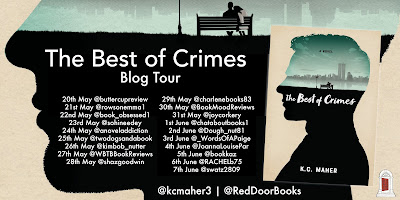 Delighted to be the latest stop on the Blog Tour for THE BEST OF CRIMES by K.C.MAHER - my thanks to Anna at Red Door Publishing for putting this all together and letting me be part of it! 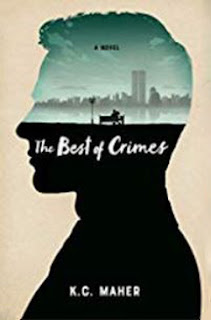 ABOUT THE BOOK
Walter, a child prodigy who now works on Wall Street, considers himself a father figure to Amanda, his daughter’s best friend and only child of a neglectful single mother. But when he loses his job after the 2008 financial crisis and his materialistic wife leaves him, taking their daughter, his relationship with Amanda enters a precarious new stage.
Walter struggles to give her the affection and guidance she needs, without succumbing to her budding sexuality. In the year before she enters high school, these two lonely souls will transform each other as Walter breaks out of his emotional shell, and Amanda blossoms into adolescence.
In a world that has always failed to protect its most vulnerable, The Best of Crimes is a new narrative and an unconventional love story that will challenge your perception of right and wrong.
PURCHASE LINKS

K.C. Maher’s short fiction has appeared in literary journals including Ascent, Black Warrior Review, Confrontation, Cottonwood, Gargoyle, and The View From Here. Her work has reached short-list status in various contests, including the Iowa School of Letters Award and Drue Heinz Literature Prize. The is her debut novel. She is mother to two children and lives in New York City with her husband

The author has taken on a very difficult subject in this book and allows you to decide for yourself as to when certain behaviour is inappropriate and seeing how it can be perceived alright in some eyes, but completely wrong in others.  She approaches it sensitively and calmly without going over the top, and I'm left wondering if maybe she could have pushed the boundaries a little further to see how that would have affected the story!

It's the story of Walter who hands himself into police at the start, admitting his guilt in kidnapping a young girl but they aren't interested!  As we look back at how is life has gone and what has happened over the years we get the background we need to make our own judgements on his behaviour.

He seems to live life fast - started working at 18 where he was a 'boy wonder' for Lehman Brothers, marries young and has a daughter Olivia so they move to the suburbs. He's a devoted father and traumatic events he goes through has him questioning his life and pushes him to enjoy it more - there's more to life than work.

When a single mother and young girl move to the neighbour, his daughter spends time with Amanda as her mother never seems to be around and that is when Walter starts finding himself drawn to this young girl - is he trying to play the part of surrogate father? or is there something darker behind his motives to spend time with her?

Despite Amanda's youth, she is extremely astute and knows she has Walter wrapped around her little finger - she's getting the attention she has always craved and plays on that.  As a reader you know that the adult should be more responsible and aware of his action, but you are also left to wonder that maybe it is all innocent on his part - there's that fine line between a harmless friendship and the intent for something more sinister.

You can't help feel for Walter when things go wrong for him personally and you just feel like he and Amanda are lost souls just looking out for one another, but still with that underlying feeling that he needs to stop spending so much time with her.

A really intriguing and thought provoking book that pushes you as a reader to see things from both sides!