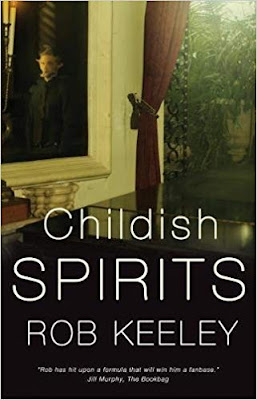 When Ellie and her family move into Inchwood Manor, Ellie quickly discovers strange things are happening. Who is the mysterious boy at the window? What secrets lie within the abandoned nursery? Who is the woman who haunts Ellie's dreams - and why has she returned to the Manor, after more than a century? Ellie finds herself entangled in a Victorian mystery of ghosts and tunnels and secret documents - and discovers that life all those years ago isn't so different from the world she knows today...Rob Keeley's first novel for children brings out all the ingredients of the classic ghost story within a recognisable modern world setting.

Readers of his short story collections for children will find in Childish Spirits the elements which made his past books such a success - strong and contemporary characters, inventive twists on traditional themes, and a winning combination of action, suspense and humour. 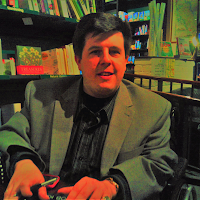 Having come to this series late - I started with book 3 The Sword of the Spirit - I've been thrilled to be able to listen to the audio version of Book 1 to see where it all began and I loved how brilliant it was to hear it all brought to life, and loved the drama, mystery and humour throughout!Ellie is the star of this series, and we find her moving to Inchwood Manor, along with her mum and older brother, as a new chapter of their life begins and her mum starts a new job helping prepare the old house to be opened to the public. Ellie is quite excited by the mve, the same can't be said for her brother Charlie!It doesn't take Ellie long to notice a young boy watching her, and she's braver than I would be when she starts exploring the Manor late at night when she starts hearing noises, and comes face to face with a prank pulling young boy called Edward! What follows then is her learning about the history of the house and finding out about the family who lived there, and why Edward seems to be trapped and so scared of his governess who still haunts the rooms too.Ellie has this boundless enthusiasm that is infectious! She's willing to throw herself into solving the mysteries of the Manor as well as helping Edward and it's also a great way to learn about the differences between growing up now, and how Edward grew up in the Victorian years. There are some scary moments alongside quite emotional times when Edward is remembering his family and this was all brilliantly portrayed in the audio version too! It's a great mix for readers (and listeners!) of all ages!I've thoroughly enjoyed seeing how this fabulous series started - I love the mix of history to be learnt and mysteries to be solved, and my thanks go to the author and publisher for letting me have a copy of the audiobook in return for a fair and honest review.