#BookReview Call Me A Liar by Colette McBeth 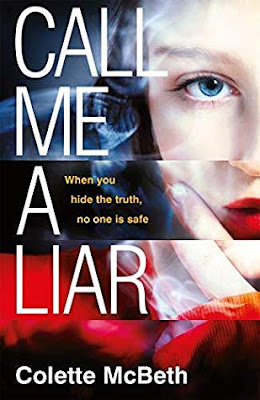 A new standalone psychological thriller from Colette McBeth, whose dark, twisty and hugely compelling novels are beloved of writers like Paula Hawkins, Clare Mackintosh and Marian Keyes.
You could say it started with vanity. We believed we were special. But the truth is we were simply vulnerable.
One of them is lying.
One of them is guilty.
No one is safe.


Months after landing their dream job, five brilliant young minds are sent on a remote retreat. But when one of them disappears, they're forced to question why they were brought here in the first place, and how far they'd go to get what they want.
And for the first time in their lives, they realise too much knowledge can be deadly.
This is the chilling story of what happens when the idealism of youth turns toxic. Can it ever be justified to do bad things for the greater good?
'Clever, atmospheric and truly scary. Colette is the real deal' Marian Keyes

5 brilliant young minds. 1 remote retreat... what could possibly go wrong?! In this twisty thriller you'll get to find out and let the mystery unravel in front of your eyes - trust nobody is my advice!!When these young people are brought together to work for a secret company using questionable methods to undertake hacking, you really get a sense of them feeling proud that they've been chosen in such a way to do this kind of work, but slightly unnerved as to what the main purpose of this company is. But they seem too wrapped up in themselves and their own issues to question too much and just go with the flow! Libby and Jo are a couple and you get to see the story from both of their point of views - how they met, their hopes and dreams and where they see their relationship going.Tess is also part of the group but tries to distance herself from the others which really riles Libby who doesn't trust her from the outset. You really are conflicted about the disputes at times as they all seem to have secrets to hide and it's difficult working out who you trust the most!When they are all sent away on a remote retreat with work, that's when the S*** hits the fan! One of them goes missing, the others suspect each other as to being behind the darker side of what is really going on and the more you find out about the company, the more shocking it all becomes... I will say no more!Really enjoyable and mysterious thriller that you can just imagine being turned into a glossy drama with all the betrayal and secrets involved!