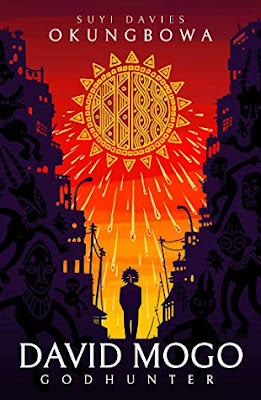 Excited to be the latest stop on the Blog Tour for DAVID MOGO, GODHUNTER by SUYI DAVIES OKUNGBOWA.  My thanks to the author, publisher and Tracy Fenton of Compulsive Readers for the copy of the book and for putting this tour together!

Since the Orisha War that rained thousands of deities down on the streets of Lagos, David Mogo, demigod, scours Eko’s dank underbelly for a living wage as a freelance Godhunter. Despite pulling his biggest feat yet by capturing a high god for a renowned Eko wizard, David knows his job’s bad luck. He’s proved right when the wizard conjures a legion of Taboos—feral godling-child hybrids—to seize Lagos for himself. To fix his mistake and keep Lagos standing, David teams up with his foster wizard, the high god’s twin sister and a speech-impaired Muslim teenage girl to defeat the wizard.

The gods have fallen, there's chaos on Earth but life continues as normal in Laos and David Mogo is trying to earn a living as a Godhunter, while also trying to figure himself out - life isn't easy if you're a mix of a human and a god!!  And what follows is a fun mix of fast paced action and the fantastical chaos of living in a messed up world, and I thoroughly enjoyed reading this book and spending time in a world which has been creatively invented by the author.

It did take me a little while to 'get' the speech used but it soon clicked and really immersed you into the world, and allowed you to really get a feel for the characters and the craziness they are surrounded by!

In David Mogo, a character has been created who is such an intriguing person - very conflicted as a person, but dealing with his own powers and trying to figure out the best way to use them.  In his work as a godhunter he is placed in the middle of the action which was really exciting - he's a person with a good heart but a tough exterior.

There are some very shady characters around which takes the story down some darker paths, but there's enough humour around to lighten the mood of this read and the message about sacrifice and trust between people comes through loud and clear.

A fascinating debut and fun read and I look forward to more from this author in the future! 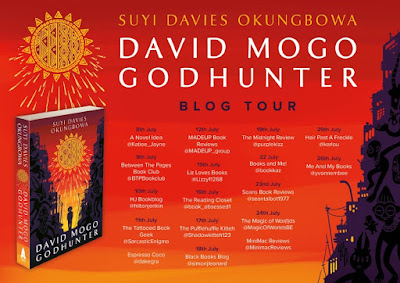