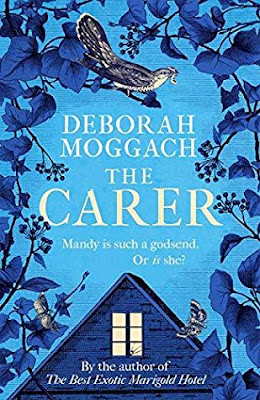 From the bestselling author of The Best Exotic Marigold Hotel and Tulip Fever, a deliciously funny, poignant and wry novel, full of surprising twists and turns.
'Unputdownable, fun and tender with characters that jump off the page. Perfection' Marian Keyes

James is getting on a bit and needs full-time help. So Phoebe and Robert, his middle-aged offspring, employ Mandy, who seems willing to take him off their hands. But as James regales his family with tales of Mandy's virtues, their shopping trips, and the shared pleasure of their journeys to garden centres, Phoebe and Robert sense something is amiss. Is this really their father, the distant figure who never once turned up for a sports day, now happily chortling over cuckoo clocks and television soaps?
Then something happens that throws everything into new relief, and Phoebe and Robert discover that life most definitely does not stop for the elderly. It just moves onto a very different plane - changing all the stories they thought they knew so well.

MY REVIEW
I found this to be quite a touching read telling the story of an elderly man being helped by a carer as his own 2 grown children don't have the time, or inclination(!), to spend time with him and they become strangely jealous of Mandy the carer as they begin to see their father in a different light, and it enforces that thought that sometimes you don't see a parent as a person in their own right until maybe sometimes it's too late.Phoebe and Robert are the children involved and their own lives aren't going as smoothly as they'd both like - a loveless marriage for one, and doomed love affairs for the other -not how they'd seen themselves being in their 60's. They still both have a lot of resentment towards their father from childhood as he always seemed to miss out on events they'd like him to be at, and now it seems they're getting their own back by not being there when he needs them.But with the appearance of Mandy, they see their day begin to enjoy life once more! He's visiting different places and laughing more - the suspicions then begin to surface with Phoebe and Robert in wondering if Mandy has an ulterior motive of befriending James. The truth shocked me!In seeing this story play out, we also get to look back at James as a younger man - newly married and with young children and a completely different side to him is revealed and I loved the alternative perspective which really brings the depth to the characters and very cleverly shifts your judgement and challenges your view of certain people.This book really showed how the actions of others impact so deeply on others and the startling confessions revealed throughout were brilliant in taking the story in a different direction to where I thought it was all going to go! Excellent read!!