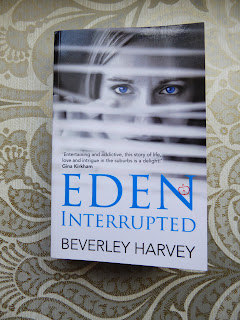 From the writer of Seeking Eden, Eden Interrupted is another sizzling slice-of-life drama - with sprinkles.Rocker Ben Wilde and his bride Lisa return from honeymoon to find a cuckoo in the nest and a surprise European tour in the diary. With the honeymoon cut short, at least they can rely on good neighbors, new arrivals Nigel and Rosemary Bradshaw...can't they? But next door, the Bradshaws harbor their own secrets; will Rosemary's grim suspicions be confirmed?At the other end of Eden Hill, Jan and Martin Bevan move into their new home following a devastating fire, but an altercation with the local dog fraternity leaves them wondering if they've made a huge mistake. Meanwhile, Eden Hill's coffee shop is under new management, when Chloe, divorced mum of teenage Jake, fulfils her long-term dream. But serving flat-whites all day leaves Chloe feeling...well, flat...until she meets gorgeous Caleb, the father of her son's girlfriend, who's guaranteed to tip her angst-ridden son over the edge.Suburbia: dull and ordinary? In Eden Hill, there's no such thing

The residents of Eden Hill are back, and there's newbies moving into the neighbourhood too which means more drama and more to enjoy as a reader - having loved the first in this series - Seeking Eden - I couldn't wait to get back for more curtain twitching and absolutely loved being back amongst this community to reconnect with some familiar faces and also getting to know the new kids on the block!Set in the suburbs this book is a delicious slice of a life we can all relate to - it almost feels like you're one of the neighbourhood as you watch over the comings and goings of everyone as they deal with daily life and the stresses and strains it puts on everyone, alongside the lighter moments and it's funny when you can recognise characters from your own neighbourhood.. no names mentioned!!Ben and Lisa are back from their honeymoon and the rockstar life has gone very quiet for Ben so he's wondering with what to do with his life now, while Martin and Jan who run the local carpet shop are having to deal with major life changes at a later stage in their lives and it's not plain sailing!The new characters really add to the story too - Chloe is a single mum, running the local cafe and dealing with the issues that having a teenage son bring her way! Jake, her son, is also not dealing too well with life as a teenage boy full of angst, and it's fascinating to see life from both of their perspectives. And the Bradshaws seemingly have the perfect life, with their daughter Iris going to private school. All I can say is that Rosemary is a blooming saint for putting up with all the s*** her husband Nigel puts her through!!With a wide range of characters it means that this book can touch on a variety of subjects - depression, teenage issues, dementia, parenting issues,moving to a new area and trying to fit in ..just to name a few - and that is this books strength I think! We can all relate to something that is featured and being part of a neighbourhood and the gossip and speculation of what goes on behind others' closed doors is always at the forefront. But having that sense of community where people help one another out in times of need is also very touching.I absolutely loved being back in the Eden Hill neighbourhood again and hope there maybe room to revisit the characters again in the future!

My thanks to the author for the copy in return for a fair and honest review.