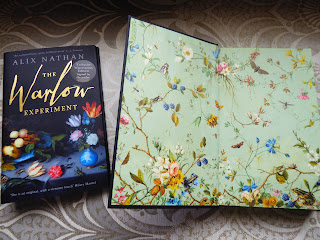 The year is 1792 and Herbert Powyss is set on making his name as a scientist. He is determined to study the effects of prolonged solitude on another human being, though before now Powyss's sole subjects have been the plants in his greenhouse. He fills three rooms beneath Moreham House with books, paintings and even a pianoforte, then puts out an advertisement, hoping for a gentleman recluse to claim the substantial reward.The only man desperate enough to apply is John Warlow, a semi-literate farm labourer who needs to support his wife Hannah and their six children. Cut off from nature and the turning of the seasons, Warlow soon begins losing his grip on sanity. Above ground, Powyss finds yet another distraction from his greenhouse in the form of Hannah, with whom he rapidly becomes obsessed. Does she return his feelings, or is she just afraid of his power over her family's lives?Meanwhile, the servants are brewing up a rebellion inspired by recent news from across the Channel. Powyss may have set events in motion, but he is powerless to prevent their explosive and devastating conclusion.Elegantly told and utterly transporting, The Warlow Experiment is an outstanding literary novel that announces a major new voice in British fiction

A Reward of £50 a year for life is offered to any man who will undertake to live for 7 years underground without seeing a human face: to let his toe and fingernails grow during the whole of his confinement, together with his beard.  Commodious apartments are provided with cold bath, chamber organ, as many books as the occupier shall desire.  Provisions will be served from Mr Powyss's table.  Every convenience desired will be provided.

Wow! Yep, one of those books that I found to have lived up to the hype that I'd heard about it before buying my own copy! A stunning piece of historical fiction that just made me slow my whole reading speed down so I could savour every word! Think it's fair to say I enjoyed this one!!When an advert was placed in 1783 by Herbert Powyss looking for somebody to volunteer to live in solitary confinement for 7 years, but surrounded by food, books etc for the princely sum of £50 a year for life, John Warlow steps forward thinking of the financial rewards for his family - a wife and 6 children - and not giving any thought to the severity of the experiment facing him.Herbert Powyss is a reclusive scientist looking to make a name for himself and thinks a study of human behaviour is one way to get himself noticed, and in John Warlow he has someone who can be genuinely studied.You might think that reading about a man being stuck in a cellar - a well appointed cellar at that - wouldn't be much fun to read about, but what the author has done with this book is focus on the human impact, not only on John Warlow living life without speaking to another soul, but how his abscence affects his wife and children, how the scientist himself deals with his justification of using another human being, and how the servants in the home of Powyss come to terms of this man living beneath them.It was such a fascinating concept and staggering to hear that the actual advert was really placed in 1793, and you can't help but put yourself in that position and wonder how you'd deal with things in similar circumstances. Powyss himself was very reclusive and probably saw it as no hardship to be cut off from the real world for so long.As the years go by, the impact on all the characters is clear to see and it's clear that it isn't only John Warlow who is suffering because of this experiment.It's often shocking and brutal, but is a totally enthralling study of human nature and behaviour and I was totally entranced from the first page to last! Brilliant!