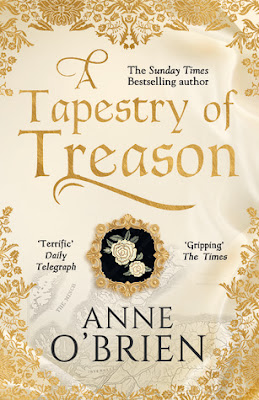 Hugely delighted to be the latest stop on the fabulous blog tour for A TAPESTRY OF TREASON by ANNE O'BRIEN.  My thanks to the author and publisher for letting me be part of it all!

‘Gripping’ The Times
Her actions could make history – but at what price? 1399: Constance of York, Lady Despenser, proves herself more than a mere observer in the devious intrigues of her magnificently dysfunctional family, The House of York.Surrounded by power-hungry men, including her aggressively self-centred husband Thomas and ruthless siblings Edward and Richard, Constance places herself at the heart of two treasonous plots against King Henry IV.  Will it be possible for this Plantagenet family to safeguard its own political power by restoring either King Richard II to the throne, or the precarious Mortimer claimant?Although the execution of these conspiracies will place them all in jeopardy, Constance is not deterred, even when the cost of her ambition threatens to overwhelm her.  Even when it endangers her new-found happiness.With treason, tragedy, heartbreak and betrayal, this is the story of a woman ahead of her time, fighting for herself and what she believes to be right in a world of men.Giving voice to the forgotten women of history, this is the next brilliant historical novel from Sunday Times bestselling author Anne O’Brien.Praise for A Tapestry of Treason‘A wonderful novel . . . a rich, gripping, enchanting read. Anne’s vivid writing took me straight to the year 1400 and kept me wonderfully lost there throughout’ Joanna CourtneyPraise for Anne O’Brien‘O’Brien cleverly intertwines the personal and political in this enjoyable, gripping tale’ The Times‘O’Brien is a terrific storyteller’ Daily Telegraph‘A gripping story of love, heartache and political intrigue’ Woman Home‘Packed with drama, danger, romance and history … the perfect reading choice for the long winter nights’ The Press Association‘A gripping historical drama’ Bella

The Queen of getting me more interested in history is back with another fascinating and gripping historical story that gives flesh to those names of the past that we've all heard so much about, but brings their stories to the fore and gives them a voice.

In this book that character is Lady Constance Despenser, who is a daughter of the influential House of York.  Set in 1399 there are troubled times on the horizon surrounding the  battle over taking the throne. I have to admit to knowing very little about the ins and outs of this period of history, but this book was so brilliant in explaining the power struggles, the family disputes and the lengths people were going to to make sure they were on the 'right side'.  There's politics, plots and plenty of scandal to devour in this story and it all felt so relevant and relatable despite the complicated times they were living in!  You got the feeling that many of the players were only interested in self preservation so would allign themselves strategically just to take care of themselves!

Constance is an enthralling character to follow and focus on - she's very pragmatic, a realist but she's very clever and very loyal to her family and that comes across forcefully in this story.    In a time where women were not really heard from, she knew how to play the game, knew her role and was willing to make difficult decisions when needed.    But despite her family loyalty she doesn't appear to be that maternal, and not very emotional when it comes to matters concerning members of her family.

What I love about these type of books is the journey that the story takes you on, and that you can then do your own research afterwards to find out more about the times and characters. I loved that there were afternotes in this book that allowed you to find out what happened to certain characters along with places to visit that had connections with the time and events in this period of history.

I found this to be an intelligent, feisty and captivating historical story and I can't wait to see what period of history and what character Anne turns her attention to next!!


My thanks to the author and Lily Capewell at HQ Stories for the advance reader copy in return for a fair and honest review. 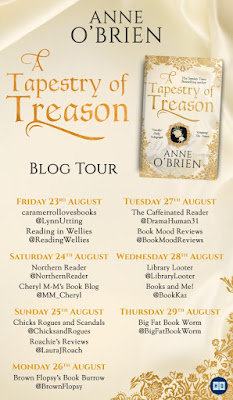