#BookReview #PaperbackPublicationDay A BOY AND HIS DOG AT THE END OF THE WORLD by C.A.FLETCHER 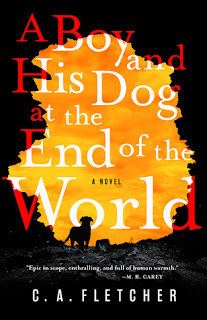 Delighted to share my review again on PUBLICATION DAY for the paperback edition of this stunning read.

Here's a little more about the book to get you in the mood!!

“My name’s Griz. I’ve never been to school, I’ve never had friends, in my whole life I’ve not met enough people to play a game of football. My parents told me how crowded the world used to be, before all the people went away, but we were never lonely on our remote island. We had each other, and our dogs.Then the thief came.
He told stories of the deserted towns and cities beyond our horizons. I liked him – until I woke to find he had stolen my dog. So I chased him out into the ruins of the world.
I just want to get my dog back, but I found more than I ever imagined was possible. More about how the world ended. More about what my family’s real story is. More about what really matters.”

'Epic in scope, enthralling, and full of human warmth' M. R. Carey, author of The Girl with all the Gifts

'You'll remember A Boy and His Dog at the End of the World long after you finish reading' Peng Shepherd, author of The Book Of M

'Truly engrossing . . . brings hope and humanity to a cold and scary world' Keith Stuart, author of A Boy Made of Blocks 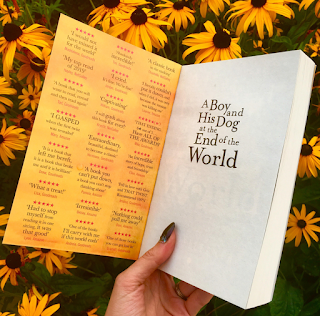 Imagine living on a remote island with only your parents, sister and 2 dogs - there's nobody else left in your little part of the world as the number of people is increasingly low as the birthrate has fallen dramatically.  This is the position that Griz is in - hearing stories of life in the lands beyond but never able to go there.  That is until someone steals his beloved dog, and his only thought is to jump in a boat and follow!  It just showed the bond created especially when your world is so uncomplicated and focused on those around you.

As Griz explores deserted towns and cities we get a real feeling of just how different the world is - Griz can only imagine things we took for granted and it's brilliantly told as Griz speaks to us in each chapter of what life must have been like in our 'crowded world'.    Griz is extremely brave in taking on this pursuit and just shows the lengths we'd all go to save those most important to us - be they human, or animals!

The innocence of Griz is the main thing I took from this book - - his wonder at hearing birdsong, wondering what life was like full of noise, cars, even seeing animals in zoos.  Being so remote on the island with his family, everything new he sees while exploring is a revelation and his time opens his eyes to a different way of seeing things .

It's difficult to really say much more without giving away too much, but I thoroughly enjoyed being in the world of Griz and loved the twists and turns that awaited him and me as a reader! A book that takes you on a dark but memorable journey!

Email ThisBlogThis!Share to TwitterShare to FacebookShare to Pinterest
Labels: A Boy and his Dog at The End of the World, August 2019, Book Blogger, Book Review, C.A.Fletcher, Orbit, Paperback release, repost