#BookReview Zippy and Me by Ronnie Le Drew 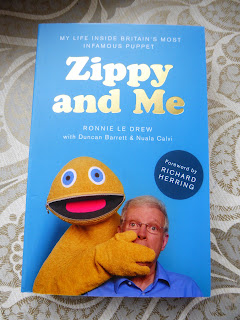 Over the course of almost half a century, puppeteer Ronnie Le Drew has worked with the greats – from David Bowie in Labyrinth to Michael Caine in The Muppet Christmas Carol. But the role that defined his career was Rainbow’s Zippy, who he operated for more than twenty years.
Zippy and Me is the first time a Rainbow insider has told the true story of what went on under the counter and inside the suits: the petty squabbles between performers, wrangling with TV executives, and scandals such as the 'love triangle' between musicians Rod, Jane and Freddy. Not to mention the now infamous X-rated episode shot for an ITV Christmas party, which subsequently found its way to the Sun.Interweaved with the dirt on what really went on behind the scenes is the story of Rainbow’s heyday in the 1970s and 80s, when its stars found themselves catapulted into an exciting showbiz world – scooping a BAFTA award and even performing for the queen – and the story of a young lad from a south London council estate who defied his parents' protests to became one of the most respected puppeteers of all time.

I really love the way the UNBOUND site works - a crowd funding site to get books off the ground - and this is how Zippy and Me came to be, and I'm so pleased to have been part of it and now have my name in the book as one of the supporters!

Any excuse to walk down memory lane is fine by me, and this was a perfect example of an entertaining and enjoyable read which has me pining for the past and fun kids TV shows that I grew up with!!Ronnie Le Drew is the puppeteer behind Zippy, one of the most loved UK puppets, and in his memoir he talks about his time on Rainbow - the good and the bad! - as well as how he got into the world of puppets, his childhood and the other work he used to do in TV, theatre and film. I loved how funny his stories are alongside some pretty tragic ones too that really affected him and those around him.It was also fascinating to hear his stories about his time working on the Muppet films too and I'm now just itching to re-watch all of those alongside old episodes of Rainbow to see Zippy, Bungle and George again! A lovely memoir and one that was so much fun to read!