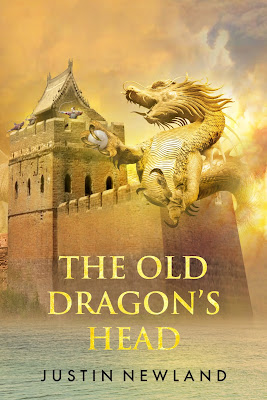 Delighted to bring you my thoughts today on THE OLD DRAGON'S HEAD by JUSTIN NEWLAND as part of the fabulous Blog Tour. My thanks to the author, publisher and Kelly of  LoveBooksTours for putting it all together and letting me be part of it!

Constructed of stone and packed earth, the Great Wall of 10,000 li protects China's northern borders from the threat of Mongol incursion. The wall is also home to a supernatural beast: the Old Dragon. The Old Dragon's Head is the most easterly point of the wall, where it finally meets the sea.

In every era, a Dragon Master is born. Endowed with the powers of Heaven, only he can summon the Old Dragon so long as he possess the dragon pearl.

It's the year 1400, and neither the Old Dragon, the dragon pearl, nor the Dragon Master, has been seen for twenty years. Bolin, a young man working on the Old Dragon's Head, suffers visions of ghosts. Folk believe he has yin-yang eyes and other paranormal gifts.When Bolin's fief lord, the Prince of Yan, rebels against his nephew, the Jianwen Emperor, a bitter war of succession ensues in which the Mongols hold the balance of power. While the victor might win the battle on earth, China's Dragon Throne can only be earned with a Mandate from Heaven - and the support of the Old Dragon.

Bolin embarks on a journey of self-discovery, mirroring Old China's endeavour to come of age. When Bolin accepts his destiny as the Dragon Master, Heaven sends a third coming of age - for humanity itself. But are any of them ready for what is rising in the east?

Show me a book with a dragon in it and I want to know about it! And this fabulous adventure didn't let me down as it had a little bit of everything in there for me to enjoy - mystery, humour, fantasy, power struggles and good old fashioned treachery!

At the heart of the story is Bolin who is coming to terms with having strange visions and headaches and wondering what to make of it all. He lives a simple life as a fishermans' son so to have visions is something unheard of. There has always been a dragon master around but none has been seen for 20 years - with it comes great power.

AT the same time there's an awful lot of power struggles going on with various other characters. And woe betide you if you get in the way! As Bolin goes looking for answers, we also find the character Feng looking to find answers to the goings on in his life and there are plenty of people who don't want them to find out the truth.

With the threat of the Mongol Army attacking the town never far away, he tension is always rising and I loved all the little subplots coming together and keeping you on your toes as to where the story was going, and what secrets from the past were next to be revealed - and what consequences they would lead to!

This book was an enjoyable mix of history with the supernatural and was really well paced. Destiny plays a big part in this story too and I'm hoping there will be further adventures featuring these characters so we can watch them on their journey! 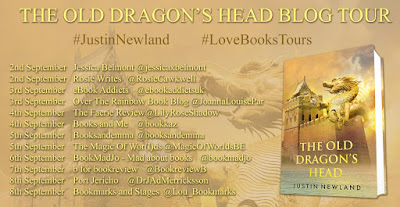