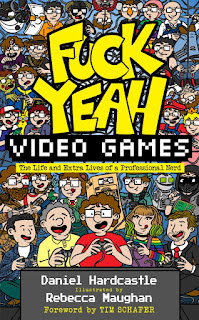 A huge delight to be the latest stop on the Blog Tour for FUCK YEAH VIDEO GAMES by DANIEL HARDCASTLE.  As a keen gamer myself, especially in the past, I've been eagerly awaiting the release of this book and look forward to sharing more about it along with my thoughts!

My thanks to the author, publisher and Anne of Random Things Tours for the copy of the book and letting me be part of this epic tour!

As Daniel Hardcastle careers towards thirty, he looks back on what has really made him happy in life: the friends, the romances… the video games. Told through encounters with the most remarkable – and the most mind-boggling – games of the last thirty-odd years, Fuck Yeah, Video Games is also a love letter to the greatest hobby in the world.

From God of War to Tomb Raider, Pokémon to The Sims, Daniel relives each game with countless in-jokes, obscure references and his signature wit, as well as intricate, original illustrations by Rebecca Maughan. Alongside this march of merriment are chapters dedicated to the hardware behind the games: a veritable history of Sony, Nintendo, Sega and Atari consoles.

Joyous, absurd, personal and at times sweary, Daniel's memoir is a celebration of the sheer brilliance of video games.

This is the most successful book in UK crowdfunding history: it funded in a mere 42 minutes, and has so far been backed by over 9,000 supporters. If these pledges were counted as sales, the book would have been a Sunday Times bestseller in the week of its launch

Dan will be undertaking an extensive UK tour.

For fans of Terrible Old Games You've Never Heard Of by Stuart Ashen, Hey! Listen!: A journey through the golden era of video games by Steve McNeil, The Nostalgia Nerd's Retro Tech by Peter Leigh, Speccy Nation by Dan Whitehead.

Daniel Hardcastle, aka DanNerdCubed, is a YouTube gamer who has accumulated more than 2.6 million subscribers over the course of his 4000 videos. He lives with his partner, Rebecca Maughan.

As a huge fan of computer games - I still have my Atari, Commodore 64 and countless Nintendo consoles - I knew this was going to be my kind of book! And I wasn't wrong! Although the author mainly features games from the 90's, it's still written in a way that I connected with and has now left me itching to go and buy a new console or two and try out some more of the games he has recommended!

This is a love letter to computer games!  The moments in our lives where we remember a certain game that coincided with a memory and how it made us feel.  The fact that you could be cool at school if you were good at playing certain games!  The different lives you could pretend to have through playing these games and how you could see a whole new side to a person by the way they reacted during their time playing a game!

It also highlights the changes that there's been over the years in playing games and what video games meant - it used to be for fun but now it all seems to be about how much money can be made.  Something that I struggle to get my head around at times to be fair and I just wonder if that takes away that element of escapism that games used to offer me, as nowadays they have to be taken so seriously.

Illustrated brilliantly by his wife, this book was such a blast to read.  So many funny footnotes alongside fascinating facts, I think it's a book that will appeal to so many different people.  And not only does he focus on the great games, he mentions the stinkers too - the hits and the misses, the classics and the clunks!  How some games worked because of their simplicity and how others were just complete madness! It also looks at the main players behind the games - Sony, Sega, Atari, Nintendo along with many of the top games such as Sims, Mario, Sonic, Fortnite and Tomb Raider and the impact each of these games had at the time.

It brought back so many fun memories for me and has made me learn a lot more about the video game industry and history too and I can't wait to start my homework now of playing some of the games he mentions in his top list!! Fabulous fun! 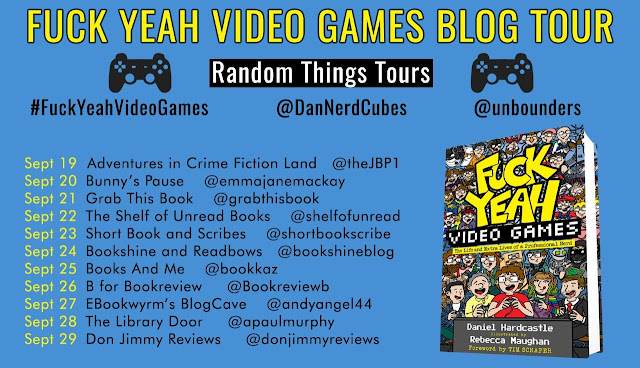