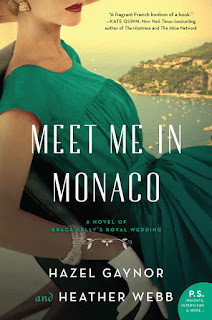 Thrilled to be the latest stop on the Blog Tour for the fabulous MEET ME IN MONACO by HAZEL GAYNOR and HEATHER WEBB. My thanks to the publishers for the copy of the book and letting me be part of it all!

Set in the 1950s against the backdrop of Grace Kelly’s whirlwind romance and glamourous wedding to Prince Rainier of Monaco, New York Times bestselling author Hazel Gaynor and Heather Webb take the reader on an evocative sun-drenched journey along the Côte d’Azur in this page-turning novel of passion, fate, and second-chances.Movie stars and paparazzi flock to Cannes for the glamorous film festival, but Grace Kelly, the biggest star of all, wants only to escape from the flash-bulbs. When struggling perfumer Sophie Duval shelters Miss Kelly in her boutique, fending off a persistent British press photographer, James Henderson, a bond is forged between the two women and sets in motion a chain of events that stretches across thirty years of friendship, love, and tragedy.James Henderson cannot forget his brief encounter with Sophie Duval. Despite his guilt at being away from his daughter, he takes an assignment to cover the wedding of the century, sailing with Grace Kelly’s wedding party on the SS Constitution from New York. In Monaco, as wedding fever soars and passions and tempers escalate, James and Sophie—like Princess Grace—must ultimately decide what they are prepared to give up for love.

If you're looking for a book to transport you back in time - to a time of glamour, glitz and wonderful settings, then look no further! This is the book  for you! And I found myself totally swept up in the romance and pining for the glamorous times and stars of  the past!

It's the story of 2 women - one slightly more well known than the other! When a young actress finds herself pursued by a photographer at the Cannes Festival, she hides out in a perfume shop and gets talking to the owner and they strike up a wonderful friendship that carries them both through changing times!

Sophie runs a perfume shop but times are tough.  She will do anything to save her beloved shop which means so much to her but she's running out of options and time!  When the young actress, Grace Kelly, ends up in her shop she's captivated by the scents created by this woman and the friendship that follows between the two is enchanting.

The photographer chasing after Grace is James who is a London photographer and has been sent on assignment to capture the sights of the Cannes film festival. When he meets Sophie he is firmly put in his place by her but there's just something about her that he can't shake.

Throughout the story we also get snippets of the news of the time concerning Grace Kelly and her rise to fame, and how the timeline went for her as she fell for a Prince.   I loved this little look back and how the media interest just grew and grew, and how their romance blossomed from a chance meeting.

The striking feature throughout the book is loyalty - Sophie was loyal to Grace and vice versa, and the loyalty shown by Sophie and James too was also clear to see.  He doted on his daughter despite having to spend so much time away from her, and his devotion for her  is something that really connects with Sophie even when it means it may come between them.

I found this book to be utterly spellbinding!  The historical element was perfectly played, as was the romances and the difficult choices that many characters had to make on their journeys.  I have since found myself looking back at old photos and video clips of Grace and Prince Rainier and just imagining Sophie and James being part of it all behind the scenes!! 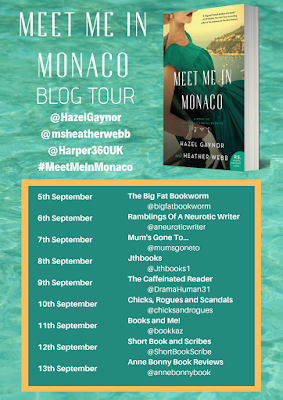