#BookReview AFTER THE END by CLARE MACKINTOSH 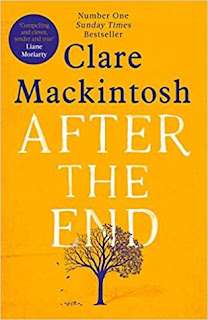 Max and Pip are the strongest couple you know. They're best friends, lovers—unshakable. But then their son gets sick and the doctors put the question of his survival into their hands. For the first time, Max and Pip can't agree. They each want a different future for their son.What if they could have both?A gripping and propulsive exploration of love, marriage, parenthood, and the road not taken, After the End brings one unforgettable family from unimaginable loss to a surprising, satisfying, and redemptive ending and the life they are fated to find. With the emotional power of Jodi Picoult's My Sister's Keeper, Mackintosh helps us to see that sometimes the end is just another beginning

This was a very emotive story that cleverly explores the 'what if's' around a married couple dealing with their terminally ill son but disagreeing on the course of treatment for him. The alternate storylines threw me a little bit when I first started reading them, but it soon made perfect sense in allowing the story to be told in this way and really added to your experience of reading as you'd put yourself in that position and wonder what you'd do in a similar position.Max and Pip are a happily married couple who should be living life to the fullest with their son Dylan, but he's in hospital with a brain tumour so his life is medication, tube feeding and being made 'comfortable'. Pip is by his side constantly - her world is the hospital and the other parents and children on the ward - her husband is still working flying back to the US on and off, whilst still consumed by thoughts of his son. When the news about his condition worsens, the split in the outlook of Max and Pip becomes clear - what's best for Dylan? How do you decide if you can't agree? So a court case is the way forward...The story then splits to the alternate timelines - what would happen if Pip got her way to let him die with dignity? and what would happen if Max got his wish to try new treatments in the US? This opens up a great insight into how life could turn out in both scenarios and really showed that there is no real right or wrong in such a tragic situation.WE also get the viewpoint of Laila, a Dr working at the hospital and dealing with Dylan and how he impact affects her and I really liked seeing this different persepective from someone who has to deal professionally but can't help but get emotionally attached.It also brought to light the impact that the role of the media plays - how the public take sides in matters such as these - the abuse that the parents could receive from people who didn't know all the facts but would make their minds up from what they read in the papers or saw on TV.I was totally absorbed in this story and found the way the different outcomes were allowed to play out was quite refreshing in the way that it let you see the 'after' story evolve, often in ways I didn't expect. A very moving story.