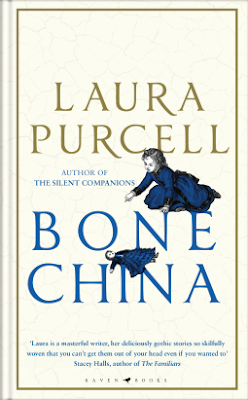 Consumption has ravaged Louise Pinecroft's family, leaving her and her father alone and heartbroken. But Dr Pinecroft has plans for a revolutionary experiment: convinced that sea air will prove to be the cure his wife and children needed, he arranges to house a group of prisoners suffering from the same disease in the cliffs beneath his new Cornish home. While he devotes himself to his controversial medical trials, Louise finds herself increasingly discomfited by the strange tales her new maid tells of the fairies that hunt the land, searching for those they can steal away to their realm.

Forty years later, Hester Why arrives at Morvoren House to take up a position as nurse to the now partially paralysed and almost entirely mute Miss Pinecroft. Hester has fled to Cornwall to try and escape her past, but surrounded by superstitious staff enacting bizarre rituals, she soon discovers that her new home may be just as dangerous as her last.

Gloriously gothic and deliciously dark - it's fair to say that I loved reading this and I will never look at a piece of willow patterned china the same way ever again!!

Bone China is a story set over 2 timelines and it's a fascinating mix of history, folklore, obsession, madness and superstition.  There are many threads throughout that I found so absorbing and I loved how the story went backwards and forwards to give you different glimpses of the characters and to watch it all come together at the end was extremely satisfying!

We start with Hester Why as she travels to Cornwall to take up a position looking after Louise Pinecroft who is confined to her home and rarely speaks.  Hester is obviously trying to escape her past for whatever reason, but she soon finds that her present may be just as dangerous as what she left behind.

If she's looking for isolation then the home of Louise Pinecroft might be just the place for her!  There's chatter amongst the staff at Morvoren House and she has warning of who to avoid and also the folklore that outsiders may dismiss as nonsense but those living there are more wary.  With the almost mute Louise spending the majority of her time staring at the bone china colllection in her room, Hester finds the past playing more and more on her mind and her reliance of self medicating becomes the only way to get through each day.

The story then looks back on Louise in the past, living at the house with her father who was a Doctor, and he sets out on a revolutionary way of treating patients with consumption.  It's a fascinating look at life of a different time, and using prisoners at his 'guineapigs' was the only way he could get permission to try his methods out.   Having lost his family to the disease he was driven to the point of obsession to try and eradicate it.

And with Hester we get to see her life before her move, and her devotion to her mistress Lady Rose, new wife of Sir Arthur Windrop, whose mother ruled the roost and Lady Rose found herself becoming more reliant on Hester as nothing she ever did was good enough for his mother.  Hester was smitten and found herself giving more advice to Lady Rose that others didn't appreciate so much and wanted to find a way to ease her out of the picture - and Hester took to alcohol there too to numb the pain and sadness she felt when things didn't go her way.

As Hester settles into life looking after Louise, a number of other stories open up not least the strange things that are happening around the room of Louise and the influence that certain staff have on the daily goings on at the house.  It all felt very unsettling and it was brilliantly played out with every new twist and turn.

It seemed to me that the author had so much fun with these characters and settings!  Her imagination ran wild with the folklore elements and it was equally exciting and terrifying as to where the story was going to go!

This is a  book that chilled and thrilled me and I loved every single minute!  Fabulous!!