#BookReview Jessie's Little Bookshop by the Sea by Kirsty Ferry 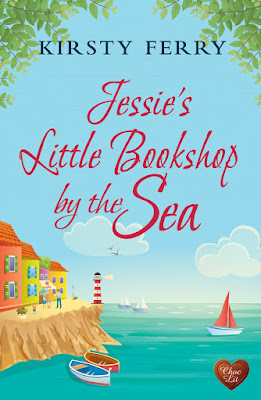 Another wonderful new story from Kirsty Ferry. Part of Kirsty's Tempest Sisters series but they can all be read on their own. This is Jessie's story.
Take a trip to the little bookshop by the sea …
Jessie Tempest has two main interests: reading books and selling books. Her little bookshop in the seaside town of Staithes is a cosy hideaway from the chilly Yorkshire wind, but it’s also Jessie’s sanctuary from the outside world.When writer Miles Fareham and his son Elijah arrive to stay in the holiday apartment above the shop, it’s a test for Jessie who has always felt clueless when it comes to kids. But as she learns the story of the single father and the inquisitive eight-year-old, Jessie realises that first impressions aren’t always the right ones – and, of course, you can never judge a book by its cover

A book about a woman who loves books, set by the seaside in a little bookshop - it's perfect!! I love The Tempest Sisters series and this is another wonderful installment, but can easily be read as a standalone and it will make you just want to run off and open a bookshop by the sea!!

Jessie is the bookworm in this book! She loves reading and she loves her bookshop, although she often struggles to put the books she gets in on the shelves to sell as she'd rather have them at home with her - I understand that feeling!  She has 2 sisters - Rosa and Angel - and they're a great support network for one another despite being busy doing their own things!

Her bookshop has  a holiday flat above and the only thing Jessie isn't keen on come school holidays is children moving in for the week because that means noise! And her feelings towards children aren't helped when she has a run in with a father and son who she crosses paths with - the father takes umbrage at his child being told off, the little boy just thinks it's great that he's a rebel and has been thrown out of a shop - as most 8 year olds would!

When the father and son team turn out to be the holiday tenants that brings much awkwardness to their meetings but they soon find common ground - Miles, the father, is a writer and in town to do some research.  Elijah loves to read and that's something Jessie understands so soon finds in this little person that she 'gets'!    He's such a cute and funny little boy anyway you can't help not being won over by him!!

The relationship between Miles and Jessie is a really touching one,especially as he's still struggling to come to terms with loss in his and Elijah's life.  Their shared love of books is the thing that brings them together and the more time Jessie starts spending with them, the more it all seems so comfortable and meant to be.  What isn't so helpful is that he and Elijah live in Suffolk! Not exactly round the corner so they both start being realistic about where things could go...

I just loved the setting and all the characters in this story! It has all the feels and was just so easy to connect to and want that happy ending that people like this deserve. Wonderful!!