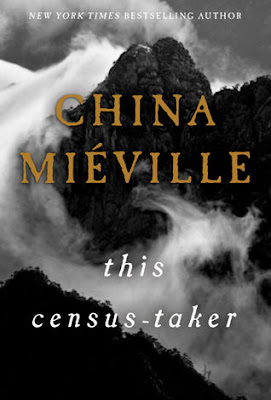 For readers of George Saunders, Kelly Link, and Karen Russell, This Census Taker is the poignant and uncanny new novella from award-winning and bestselling author China Miéville. After witnessing a profoundly traumatic event, a boy is left alone in a remote house on a hilltop with his increasingly deranged parent. When a stranger knocks on his door, the boy senses that his days of isolation are over—but by what authority does this man keep the meticulous records he carries? Is he the boy’s friend? His enemy? Or something altogether other?

A strange and unsettling reading experience, but one that is pretty absorbing and shocking in equal measures! I'm still a little unsure as to what happened at certain points and think it may be one of those that is left open for interpretation!At the heart of the story is a young boy who grows up witnessing brutality at home on a daily basis. The family are very insular and live out of the village, but he often sits and watches them play and wishes to join in. He also witnesses his father carrying out savage acts of brutality. AT one point this gets too much for the boy who runs into town telling everyone he's just seen a murder at his home - when they investigate there is no trace of blood so did he imagine it?The father is a very manipulative man and watching his way of life was terrifying. The young boy tries to run away with the help of some local children he befriends but there's always something getting in his way. The only person who seems to want to listen is a man who shows up at the house one day to ask his father questions, but while he wasn't there the boy opened up instead and the story then takes on a new focus as to what is this man after.With so much left open for you to interpret whatever way you wish, there was still enough to keep me absorbed in this bizarre little book and eager to read more from this author to see if this way of writing is normal for him!