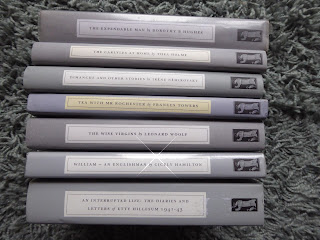 Sometimes it needs to be done!!   You just need more grey books in your life, so through a combination of online used book sites and local charity shop finds, I have found myself the new owner of 7 more Persephone titles to add to my collection - bringing the total now to 35!

So here's a little look at the new titles - would love your thoughts if you've managed to read any of these! Which one should I read first?!

An Interrupted Life: The Diaries and Letters of Etty Hillesum 1941-43

Etty Hillesum (1914-43) lived in Amsterdam, like Anne Frank, and like her she kept a diary. 'All the writings she left behind,' writes Eva Hoffman in her Preface to this edition of her diaries and letters, 'were composed in the shadow of the Holocaust, but they resist being read primarily in its dark light. Rather, their abiding interest lies in the light- filled mind that pervades them and in the astonishing internal journey they chart. Etty's pilgrimage grew out of the intimate experience of an intellectual young woman - it was idiosyncratic, individual, and recognisably modern... The private person who revealed herself in her diary was impassioned, erotically volatile, restless... Yet she had the kind of genius for introspection that converts symptoms into significance and joins self-examination to philosophical investigation... In the last stages of her amazing and moving journey, Etty seemed to attain that peace which passeth understanding... Finally, however, the violence and brutality she saw all around her overwhelmed even her capacity to understand... But by knowing and feeling so deeply and fully, an unknown young woman became one of the most exceptional and truest witnesses of the devastation through which she lived.'

Dimanche and Other Stories

Irène Némirovsky, b.1903, has become one of France’s most famous writers. But after her death in 1942 she was virtually forgotten. It was only with the rediscovery of the manuscript of Suite Française in a suitcase and its publication in France in 2004 and in the UK and USA in 2006 that her name started to become as well-known as it is today.

Némirovsky was brought up in Tsarist Russia, but after the Revolution her family escaped to France, where they lived a comfortable bourgeois life in Paris and in Biarritz. Her first novel, David Golder, came out when she was 26 and she became instantly famous. The book was a penetrating glimpse of a world she knew well, the circle of successful or not-so successful Russian Jewish businessmen, speculating ruthlessly in oil and minerals. David Golder is appallingly treated by his wife: she owes something to Némirovsky’s mother (from whom she was estranged most of her adult life). The book’s enormous success was based on the directness of its language, including crudities unusual in good literature.

None of the later novels were as successful as David Golder and the short stories were written in large part because Némirovsky and her husband had two daughters and both needed to earn in order to help support what was by now quite a lavish way of life. Yet the ten pieces in Dimanche are everything that a short story should be: beautifully written, novels in miniature, fascinating, profound, all this and more. As in a Chekhov short story, little happens but everything happens. Whether describing the impatience of a girl waiting for her lover, the tortured relationships of a large family, or the emotions of someone ﬂeeing the Nazis, Némirovsky is always an extremely astute observer, delicate, perceptive and ironic.

When these captivating and at times bizarre stories were published posthumously in 1949, Angus Wilson wrote: 'It appears no exaggeration to say that Frances Towers's death in 1948 may have robbed us of a figure of more than purely contemporary significance. At first glance one might be disposed to dismiss Miss Towers as an imitation Jane Austen, but it would be a mistaken judgment, for her cool detachment and ironic eye are directed more often than not against the sensible breeze that blasts and withers, the forthright candour that kills the soul. Miss Towers flashes and shines now this way, now that, like a darting sunfish.' 'At her best her prose style is a shimmering marvel,' wrote the Independent on Sunday, 'and few writers can so deftly and economically delineate not only the outside but the inside of a character…There's always more going on than you can possibly fathom.' And the Guardian said: 'Her social range may not be wide, but her descriptions are exquisite and her tone poised between the wry and the romantic.'Five of the stories were read on BBC Radio 4.

The Wise Virgins (1913) is a semi-autobiographical novel about a dilemma: whether Harry, the hero, should go into the family business and marry the suitable but dull girl next door or move in artistic circles and marry one of the entrancing 'Lawrence' girls. For, as Lyndall Gordon writes in her Persephone Preface: 'It is a truth widely acknowledged that Camilla Lawrence is a portrait of the author's wife - Virginia Woolf.' This is one reason why the novel is so intriguing. But it is also a Forsterian social comedy, funny, perceptive, highly intelligent, full of clever dialogue and at times bitterly satirical; while the dramatic and emotional denouement still retains a great deal of its power to shock. It was on his honeymoon in 1912 that Leonard Woolf began writing his second (and final) novel. He was 31, newly returned from seven years as a colonial administrator, and asking himself much the same questions as his hero. Helen Dunmore wrote in The Sunday Times: 'It's a passionate, cuttingly truthful story of a love affair between two people struggling against the prejudices of their time and place. Woolf's writing is almost unbearably honest.'

The critic HRF Keating chose The Expendable Man as one of his Crime & Mystery: The 100 Best Books. ‘A late addition to the thirteen crime stories Dorothy B Hughes wrote with great success in one prolific spell between 1940 and 1952,’ it was, in his view, her best book. But it is far more than a crime novel. Just as her earlier books had engaged with the political issues of the 1940s – the legacy of the Depression, and the struggles against fascism and rascism – so The Expendable Man, published in 1963 during Kennedy’s presidency and set in Arizona, evokes the emerging social, racial and moral tensions of the time.

William was 'written in a rage in 1918; this extraordinary novel... is a passionate assertion of the futility of war' (the Spectator). Its author had been an actress and suffragette; after 1914 she worked at the Scottish Women's Hospital at Royaumont and organised Concerts at the Front. William - an Englishman was written in a tent within sound of guns and shells; this 'stunning... terrifically good' novel (Radio 4's A Good Read) is in one sense a very personal book, animated by fury and cynicism, and in another a detached one; yet is always 'profoundly moving' (Financial Times).

In the view of Persephone Books, William is one of the greatest novels about war ever written: not the war of the fighting soldier or the woman waiting at home, but the war encountered by Mr and Mrs Everyman, wrenched away from their comfortable preoccupations - Socialism, Suffragettism, so gently mocked by Cicely Hamilton - and forced to be part of an almost dream-like horror (because they cannot at first believe what is happening to them). The scene when William and Griselda emerge after three idyllic weeks in a honeymoon cottage in the remote hills of the Belgian Ardennes, and encounter German brutality in a small village, is unforgettable. The book, which won the Prix Femina-Vie Heureuse in 1919, is a masterpiece, written with an immediacy and a grim realism reminiscent of an old-fashioned, flickering newsreel.

This book about Thomas and Jane Carlyle's life together at 5 (now 24) Cheyne Row, Chelsea was written in the 1960s by a former actress who was then living there as co-custodian of the house with her husband. The Carlyles at Home evokes everyday life from the day the Carlyles moved in, in 1834, until Jane's death in 1866. Each of the eleven chapters describes different aspects of the house, whether it is yet another builders' drama or a maid giving birth in the china closet while 'Mr Carlyle was taking tea in the dining-room with Miss Jewsbury talking to him!!! Just a thin small door between!'