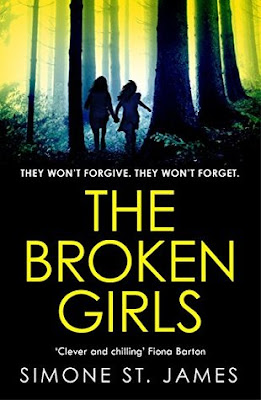 1950 - At the crumbling Idlewild Hall school for unwanted girls, four room-mates begin to bond over dark secrets and whispered fears - until one of them mysteriously disappears . . .

2014 - Journalist Fiona Sheridan can't get over the murder of her sister twenty years ago, near the ruins of Idlewild. And when another body is found during renovations of the school, she begins to uncover horrors that were meant to remain hidden - and a voice that won't be silenced.

For fans of Lisa Jewell and S.K. Tremayne, The Broken Girls is a chilling story of murder, revenge, and secrets that refuse to stay buried . . .

Knew very little about this book when I started it but it was the pick for the online book club I'm part of, and it was an inspired choice as I devoured it!! Full of mystery, murders and creepy goings on at an old school - it had the perfect mix of intrigue for me, alongside great storytelling and a mix of really fascinating characters, especially looking back at the 1950 timeline.The story starts in 2014 with Fiona, a journalist, who is still haunted by the loss of her sister 20 years earlier. There's a man in prison for the murder of Debbie, but there are still too many unanswered questions in Fiona's head and her journalist brain won't switch off until she feels settled with what went on that night. Her sister was found murdered on the playing fields of Idlewild Hall, an empty and long abandoned girls' school, so when she hears that it has a new owner who plans to reopen the school she's intent on finding out who the new owners are and what their plans are.In the 1950 timeline we get to visit with girls who are at the school. And what a fascinating and creepy school it is! This is a darker version of Mallory Towers! The pupils all seemingly have their issues and have been sent there by their parents who have almost given up on them. So to the girls, they become family to one another. They all have differing pasts and quite traumatic too so you can't help but feel sorry for these girls as they each reveal their story and their issues with the ghosts of Idlewild Hall. And the main ghost of Idlewild is Mary Hand - messages have been left in textbooks by girls over the years of their encounters with this scary girl and I really loved this aspect of the story - quite chilling! When one of the girls goes missing in 1950 her friends are quite shocked that very little effort is put into finding her and the effect that had on the remaining friends was quite profound.The more that Fiona delves into the past of the school, and the link to her sisters' murder, the more darkness is revealed and there's also the intrigue behind the new owners and their links to the school. There are so many layers in this story that I always found something new to wonder over and try to figure out the significance and the sense of mystery and darkness kept me on tenterhooks throughout! Loved it!! Highly recommended!!