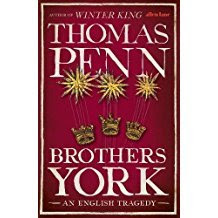 In early 1461, a seventeen-year-old boy won a battle on a freezing morning in the Welsh marches, and claimed the crown of England as Edward IV, first king of the usurping house of York. It was a time when old certainties had been shredded: by popular insurgency, economic crisis, feuding and a corrupt, bankrupt government presided over by the imbecilic, Lancastrian King Henry VI. The country was in need of a new hero. Magnetic, narcissistic, Edward found himself on the throne, and alongside him his two younger brothers: the unstable, petulant George, Duke of Clarence, and the boy who would emerge from his shadow, Richard, Duke of Gloucester.

Charismatic, able and ambitious, the brothers would become the figureheads of a spectacular ruling dynasty, one that laid the foundations for a renewal of English royal power. Yet a web of grudges and resentments grew between them, generating a destructive sequence of conspiracy, rebellion, deposition, fratricide, usurpation and regicide. The house of York's brutal end came on 22August 1485 at Bosworth Field, with the death of the youngest brother, now Richard III, at the hands of a new usurper, Henry Tudor.

Brothers York is the story of three remarkable brothers, two of whom were crowned kings of England and the other an heir presumptive, whose antagonism was fuelled by the mistrust and vendettas of the age that brought their family to power. The house of York should have been the dynasty that the Tudors became. Its tragedy was that it devoured itself.

A comprehensive and fascinating book that looks back on The Brothers York - Edward, Clarence and Richard - and made me realise how little I really know about the history of my own country!The fifteenth century was certainly not a dull time in history and with these complex characters at the centre of the action, it was a most absorbing read and we got to learn more of their personalities, the bond (or lack of!) between the brothers and the lengths they were driven to in the quest for power and glory!With the Yorkists v the Lancastrians at the core of the times, things were never pretty! It was a brutal time to be alive and even made Game of Thrones look a little tame when reading of the exploits of certain characters - the betrayals, the alliances, the deals!With a big cast of characters central to each brother, I did find it a little overwhelming at times in keeping up with who was who! But it was told in such a way that you could keep up through the years as things progressed, and with what was going on with each brother. I'm sure I must have slept through history at school as there was so much that I knew very little about and getting to see each brother individually was a great way in learning more about them and how brutal the power struggle became.It was also fascinating to see the kind of people they surrounded themselves with, as well as how the public reacted to each brother - we think of the Brexit years as being uncertain, but they are no patch on the tumultuous times back then with wars, feuds, betrayals, beheadings and battles amongst different factions across the country. It also bought home the human cost to people - the loss of life through plague, even in the royal household, and to read of 3 year olds getting married is just unimaginable to us now, but it was all part of life back then to gain more power and standing.Full of staggering details and a complete eye opener for me and has just made me more eager to more history books, especially if they're all written as brilliantly as this one!