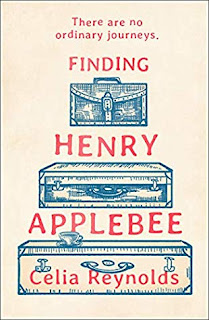 
Here Henry was, once again in a bustling train station, ready to resume where he had left off all those years ago…

Finding Henry Applebee is a charming, tender and uplifting story about unlikely friendships, the power of love – and how it's never too late to change your life. Perfect for fans of The Single Ladies of the Jacaranda Retirement Village and The Unlikely Pilgrimage of Harold Fry.

Eighty-five-year-old Henry Arthur Applebee has had a pretty good life. But one regret has haunted him for the last sixty-five years.

And so, on an ordinary December morning, he boards a train from London to Edinburgh. His goal is simple: to find the woman who disappeared from his life decades earlier. But Henry isn’t the only person on a mission. Also bound for Edinburgh is troubled teen, Ariel. And when the two strangers collide, what began as one humble journey will catapult them both into a whole new world…


PUBLISHED BY ONE MORE CHAPTER


This was a sweet and charming read, following the story of the loveable Henry Applebee as he sets out on a journey looking to find ghosts from his past, and wondering if the path he's chosen to take is the right one! And this story really does show you how fate is destined to play a part - the world really does move in mysterious ways!Henry and his dog Banjo lead a very simple life - he's 85 and has led a good life but has regrets and they seem to be playing on his mind now more than ever. For him it's now or never to find the answer to his questions so he sets out on a trip to Scotland, after his niece tracked down someone for him. She was supposed to go with him but had to cancel last minute, and at the train station a good samaritan, Ariel, helps him out when it looks like his journey might be over before it's even started!Ariel is also on her own personal journey with a mission to deliver an envelope personally to someone in Scotland. She's just lost her mother and it was so important to her to pass this message on that she must get this done. Ariel is a real sweetheart and I really enjoyed seeing how her character dealt with all that life threw her way. When she and Henry end up travelling together they're also introduced to Travis, an american musician, and the 3 of them make for an interesting combination as they share stories on the journey up.The fascinating pasts of all the characters really help you as a reader gain an interest and connection with them all. They all seem a little unsure of whether the path they've chosen to take is the right one. The more you learn about them, the more you start to sense a connection between them as people. I also really enjoyed the way the story went back in time so that we could see Henry as a younger man, a soldier, who finds love in the Tower ballroom and the story of his romance with Francine is very sweet and touching.A really enjoyable adventure!