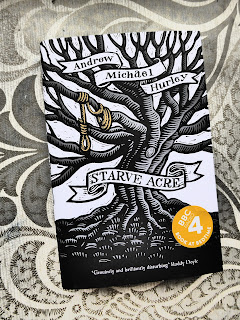 The worst thing possible has happened. Richard and Juliette Willoughby’s son, Ewan, has died suddenly at the age of five. Starve Acre, their house by the moors, was to be full of life, but is now a haunted place.Juliette, convinced Ewan still lives there in some form, seeks the help of the Beacons, a seemingly benevolent group of occultists. Richard, to try and keep the boy out of his mind, has turned his attention to the field opposite the house, where he patiently digs the barren dirt in search of a legendary oak tree.Starve Acre is a devastating new novel by the author of the prize-winning bestseller The Loney. It is a novel about the way in which grief splits the world in two and how, in searching for hope, we can so easily unearth horror

This is a beautifully written story that looks at grief as we follow a mother and father dealing with the loss of their son in very different ways, and you can't help but feel the pain and sorrow that they both are feeling.The father, Richard, deals with the loss by finding a distraction. And that for him is digging up a nearby field to try and discover the roots of the legendary tree, Stythwaite Oak - apparently used for local hangings but there's no real proof it existed other than that of woodblock prints that he uncovers amongst his fathers books. The soil in the field where it grew is dead - nothing has ever grown there, there's no worms or signs of life, just bones. Richard uncovers the bones of a hare here and spends time lovingly cleaning them and putting them back together. Anything to avoid having to listen to his wife sobbing.His wife has retreated to their home and spends all day crying. She sees no point in making an effort to leave the house as she feels the presence of her son at home and wants to be with him all the time. Her idea of contacting a spiritual group, The Beacons, to help her contact her son doesn't go down well with Richard or her sister, but she's convinced it will help her ease the pain.So this once united couple are torn apart by grief and I found it quite harrowing at times spending time in their company, especially as there were flashbacks to times when their son was alive and well. The more of these look backs we get, the more we realise that their son Ewan had a dark personality and was involved in some unsavoury incidents at school and at home where the 'dark talked to him'. It really added a creepy and chilling element to this story and the spooky goings on surrounding the house and tree were often unexpected and added a totally different feel to the way I thought the story was going to go!I did find the second part of the book didn't work quite as well for me as it did go a little too weird (and I normally embrace the weird and wonderful!) and there wasn't enough time given to explore different elements that were revealed. I would have loved this book to go on a little longer as I think it would have been more pleasing for the whole reading experience, but I still found it to be a haunting and fascinating story


My thanks to Readers First for the advanced reading copy in return for a fair and honest review.
Posted by Books and Me! at Friday, October 25, 2019