#BookReview A Walk In Wildflower Park by Bella Osborne 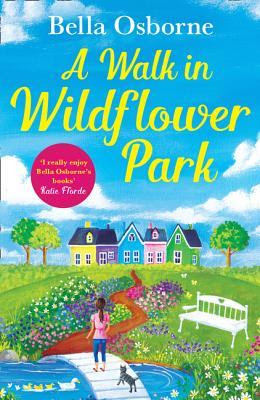 A Walk in Wildflower Park was originally published as a four-part serial. This is the complete story in one package.Life’s not always a walk in the park…Anna thought she’d found The One – until he broke off their engagement exactly a year before their wedding day. Hoping new surroundings will do her the world of good, she moves in to a place of her own on the edge of gorgeous Wildflower Park.With the help and friendship of her neighbour Sophie, Anna quickly settles in and pledges to focus on her career, but a handsome new colleague seems determined to thwart her attempts at every turn. And when she receives a text from a mystery man, it looks as though an unlikely romance is on the horizon…Is Anna about to be swept off her feet by someone she really shouldn’t be falling for? Or could this be the new start she needs and deserves?

This was a really engaging and fun read, which also ended up taking a darker turn which really added to the story, and in Anna featured a character that you could really relate to and understand the dilemmas that were facing her as she tried to move on with her life after breaking up with Liam.As always she throws herself into her work, but that becomes complicated too with changes and a new face on the scene which threaten to change her outlook and focus. Add to the mix the arrival of some mysterious text messages, and Anna finds herself severely distracted from her main aim of enjoying being single!Her best friend Sophie is also dealing with her own problems - married with children, and another one on the way, the cracks are beginning to appear in her relationship with Dave so it was interesting to see how she faced up to things, whilst trying to dish out advice to Anna on what to do in her life!I also loved the touching friendship between Anna and Bert, whom she gets to know when she rescues a cat called Maurice! It was so sweet when they spent time together and brought a little tear to my eye when she went out of her way to make him smile again - and he was very good at listening and giving her advice too!!The character of Hudson, at work, was a real interesting mix as you often wondered if he is just too good to be true! He always seemed to know the right thing to say and was brilliant at getting her to face her fears over flying.As things from the past begin to reveal themselves, the whole story takes on a much darker tinge and I really enjoyed that as it reflects real life perfectly - it's not all rainbows and mushy stuff! Life throws you plenty of curveballs and it's how you, and those around you, deal with the consequences that show your real character, and that is exactly what we got to see by the end of the book. A really entertaining read!