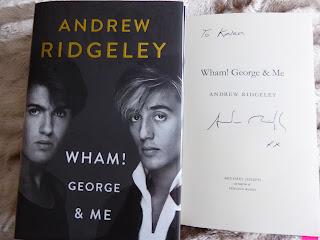 For the first time, Andrew Ridgeley - one half of one of the most famous bands in the world - tells the inside story of Wham! and his life-long friendship with George Michael.
It is 1975, Watford, and two teenagers, George and Andrew, meet for the first time. Bonding over their love for singing, song writing and pop music, together they set out to follow an impossible dream.
They didn't know it then, but they were taking their first steps towards forming Wham!, a band that was to become one of the biggest in the world.
Wham! were the soundtrack of the 80s; whether it was choosing life or Live Aid, the decade of flamboyance and fun was a party that seemed like it would never end. But it had to stop somewhere - and that was in front of tens of thousands of tearful fans at Wembley Stadium in 1986.
In Wham! George and Me, Andrew Ridgeley tells the story of Wham! - from the day they met to that iconic final concert. For the first time, he reveals what it was like being at the centre of a pop hurricane and talks of his love for and friendship with George. It's a story only he can tell.
PURCHASE LINKS
Waterstones - signed edition £20
hive.co.uk  £12.69
amazon £10.00

A fascinating and emotional memoir from Andrew Ridgeley as he looks back on his friendship with George Michael, and all the pivotal moments from an amazing career that brought back so many amazing memories for me as a fan and gave an enthralling insight into life as a popstar!From the moment they met at school, there seemed to be a connection between Andrew and George and I loved seeing him recall those times as their friendship blossomed despite the fact that they were both very different personalities,and how their families reacted to their wishes to be part of a band! There's a great use of photos, many of which I'd never seen before, and it was lovely to see a different side to them, other than the images that became so famous in magazines and on posters - many of which I had on my bedroom walls!I loved hearing how classic songs came to be, the whole experience of fame and the music business of the time, and how the press attention became such a blight to them both. Considering Wham were only a band for such a short space of time it was amazing the impact their music made around the world, and in reading this book it's made me more aware of the 2 young men behind the 'Choose Life' t-shirts!There are mentions of Georges' sexuality and how he dealt with it amongst his friends, and how he struggled with his identity throughout his life, but I think it was all delicately and respectfully dealt with by Andrew. An emotional read but a brilliant look back
★★★★★