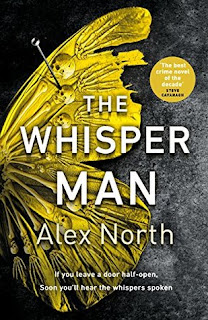 If you leave a door half-open, soon you'll hear the whispers spoken...
Still devastated after the loss of his wife, Tom Kennedy and his young son Jake move to the sleepy village of Featherbank, looking for a fresh start.
But Featherbank has a dark past. Fifteen years ago a twisted serial killer abducted and murdered five young boys. Until he was finally caught, the killer was known as 'The Whisper Man'.
Of course, an old crime need not trouble Tom and Jake as they try to settle in to their new home. Except that now another boy has gone missing. And then Jake begins acting strangely.
He says he hears a whispering at his window...

MY REVIEW
If you're lonely, sad or blue, The Whisper Man will come for you....

And that phrase just about sets the tone perfectly for this brilliantly creepy and gripping thriller, that centres around missing children and the relationship between a father and son struggling to deal with grief and how it affects them living day to day.

A little boy has gone missing in Featherbank. The police know that the longer it takes to find him, the more the possibility of a body being found and it mirrors the happenings of a case involving Frank Carter 20 years ago. He's still in jail but the investigating officer, Pete, who caught Frank at the time is still troubled by the thought that he had an accomplice all those years ago, and a body is still missing which haunts him as he can't give closure to that poor boys' family. He still goes to visit Frank in the hope that he'll slip up and reveal something but he just seems to enjoy taunting Pete and getting under his skin.  And with the disappearance of boys happening again, it looks like Pete's hunch was right.

Tom and Jake move into the area after the death of Tom's wife. Young Jake is a sweet little boy who was the first to see his mum after her death and that has played on his mind so he retreats into his own little world and talks to his imaginary friends. Tom just wants his boy to be normal and their relationship is often strained as he tries to do the best for him but often doesn't know the best way to get through to him.

Their new home unsettles Tom from the start - and me too!! Hearing noises upstairs and hearing whispering outside the window would be enough to have me running for the hills!! The more he finds out about the past of the house, the more shocked he becomes and a discovery soon leads the police to his door which means more unsettling times for him and Jake.

This was such an intense read! With the different viewpoints there was always something going on - from the family viewpoint side, to the thoughts of the police and their investigations and even the occasional soundbite from the 'killer' and what the boys mean to him - it was just all such compounding stuff that I was often afraid to read on, scared of what else might be lurking round the corner! I'm glad I did though as it was full of the right amount of tension and chills and a great backstory playing alongside which made for a terrifying but engrossing story!
★★★★★