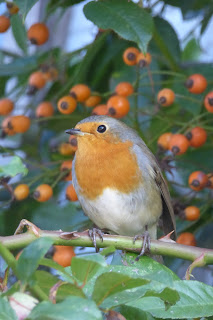 Hello!! Think I may have nailed my Christmas card shot with this photo this week! In between the rain showers this week, the robins have been happy to pose!

And on to books - it's been an ok week for reading with 3 books finished - all 5 star reads too!, no visits to Netgalley(!) and a glut of bookish loveliness being brought to me via the poor postman! Time for a look back....

A mix of purchases, review copies and prize wins!

An incredibly timely, terrifically witty and moving debut about a young writer's assistant on a late night comedy show and what transpires when she accepts an invitation from its enigmatic host to spend a long weekend at his mansion in Connecticut.June Bloom is a broke, cynical twenty-nine-year-old writer's assistant on the late-night comedy show, Stay Up with Hugo Best. Hugo Best is in his sixties, a beloved icon of TV and humor, and a notorious womanizer. After he unexpectedly retires and a party is held for his now unemployed staff, June ends up at a dive bar for an open-mic night and prepares for the sad return to the anonymous comedian lifestyle. What she’s not prepared for is a run-in with Hugo at that dive bar. Nor for the invitation that swiftly follows: Hugo asks June to come to his mansion in Greenwich for the long Memorial Day weekend. “No funny business,” he insists.June, in need of a job and money, confident she can handle herself, but secretly harboring the remains of a childhood crush on the charming older comedian and former role model, accepts. The exact terms of the visit are never spelled out, but June is realistic and clear-eyed enough to guess. Even so, as the weekend unfolds and the enigmatic Hugo gradually reveals himself, their dynamic proves to be much more complicated and less predictable than she expected.At once hilarious and poignant, brilliantly incisive and terrifically propulsive, Stay Up with Hugo Best is an incredibly timely exploration of sexual politics in the #MeToo age, and the unforgettable story of one young woman’s poignant stumbling into adulthood.

A compulsive, disturbingly relevant, twisty and powerful psychological, social-media thriller from the bestselling author of The Black Path’An intense, tightly calibrated thriller’ Huffington PostTom is a successful author, but he’s struggling to finish his novel. His main distraction is an online admirer, Evie, who simply won’t leave him alone.Evie is smart, well read and unstable; she lives with her father and her social-media friendships are not only her escape, but everything she has.When she’s hit with a restraining order, her world is turned upside down, and Tom is free to live his life again, to concentrate on writing.But things aren’t really adding up. For Tom is distracted but also addicted to his online relationships, and when they take a darker, more menacing turn, he feels powerless to change things. Because maybe he needs Evie more than he’s letting on.A compulsive, disturbingly relevant, twisty and powerful psychological thriller, The Closer I Get is also a searing commentary on the fragility and insincerity of online relationships, and the danger that can lurk just one ‘like’ away…

Seventeen-year-old Simon’s sister Charlotte is missing. The lonely Fenland village the family recently moved to from London is odd, silent, and mysterious. Simon is epileptic and his seizures are increasing in severity, but when he is told of the local curse of the Naseby Horses, he is convinced it has something to do with Charlotte’s disappearance. Despite resistance from the villagers, the police, and his own family, Simon is determined to uncover the truth, and save his sister.Under the oppressive Fenland skies and in the heat of a relentless June, Simon’s bond with Charlotte is fierce, all-consuming, and unbreakable; but can he find her? And does she even want to be found?Drawing on philosophy, science, and the natural world, The Naseby Horses is a moving exploration of the bond between a brother and his sister; of love; and of the meaning of life itself.

MINE by SUSI FOX
proof copy from Penguin 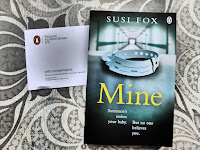 The baby in the nursery is not your baby.Waking up after an emergency caesarean, you demand to see your son.But it's someone else's child.No one believes you - not the hospital, not your father, not your loyal husband.They say you're delusional. Dangerous.They suspect you want to steal another baby.All you know is that you must find your own child before he's out of reach forever.And you're a doctor - you would know if you were losing your mind.Right? 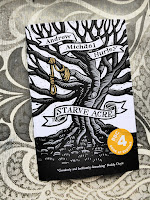 The worst thing possible has happened. Richard and Juliette Willoughby’s son, Ewan, has died suddenly at the age of five. Starve Acre, their house by the moors, was to be full of life, but is now a haunted place.

Juliette, convinced Ewan still lives there in some form, seeks the help of the Beacons, a seemingly benevolent group of occultists. Richard, to try and keep the boy out of his mind, has turned his attention to the field opposite the house, where he patiently digs the barren dirt in search of a legendary oak tree.

Starve Acre is a devastating new novel by the author of the prize-winning bestseller The Loney. It is a novel about the way in which grief splits the world in two and how, in searching for hope, we can so easily unearth horror. 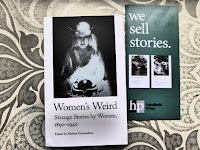 Early Weird fiction embraces the supernatural, horror, science fiction, fantasy and the Gothic, and was explored with enthusiasm by many women writers in the United Kingdom and in the USA in the late Victorian period and in the early twentieth century. Melissa Edmundson has brought together a compelling collection of the best Weird short stories by women from the late nineteenth and early twentieth centuries, to thrill new readers and delight these authors’ fans.

SEA OF LOST LOVE by SANTA MONTEFIORE
Another Twitter win!

From the author of The Gypsy Madonna and The Last Voyage of the Valentina, a breathless novel that sweeps its heroine from the Cornish coast to the rugged beauty of Puglia Italy, where she discovers a shocking truth about her family and the way to save her ancestral home.Celestria Montague always spends her summers at Pendrift Hall, the rambling, shabby mansion adorned with wisteria and clematis that has been home to the Montague family for generations. It is 1958, and the family is celebrating her father's fiftieth birthday at a lavish ball. The celebratory night ends in death and tragedy, however, and young Celestria learns that the family may lose Pendrift Hall. Her grandfather urges Celestria to play detective, to solve the mysteries surrounding the night's events, and to save the ancient mansion if at all possible. Her quest takes her to Italy's rugged and beautiful Puglia, and into the dark, cool cloisters of the Convento di Santa Maria del Mare. Here Celestria meets an enigmatic stranger and confronts unwelcome truths about her family—and herself.Sea of Lost Love is Santa Montefiore at her very best—sensitive, sensual, and complex.

Fifteen tense tales. One sleepless night.Horror lives in the shadows.It exists under the earth's surface in ancient caves; below the vast sea's undulating waves; under dense forest cover; within a storm's thick, rolling clouds; downstairs in our homes, when we hear the knife drawer rattle in the night. Even our minds and bodies harbour the alien under the skin, the childhood nightmares in our subconscious.In this collection of fifteen tales Karl Drinkwater sews flesh onto the bones of our worst fears whilst revisiting some of horror's classic settings, such as the teen party, the boat in trouble, the thing in the cellar, the haunted museum, the ghost in the machine, and the urban legends that come true. No-one is safe. Darkness hides things, no matter how much we strain our eyes. And sometimes those things are looking back at us.


WHO CARES IF THEY DIE by WENDY DRANFIELD
copy sent from the publishers - along with chocolate! - as I read this via the taster panel and it's now been released in paperback!

THE NAME OF ALL THINGS by JENN LYONS 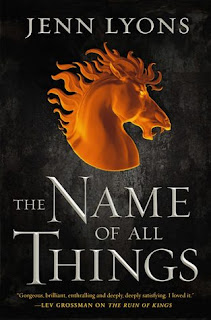 I've enjoyed that look back! And no wonder I'm sat here looking at various piles of books stacked up around me! I feel a giant clear out is required while I try and get myself organised..... but first I'd best sit down and open another book!