Delighted to be part of the fabulous Blog Tour for the lovely Lynda Stacey and KEEPER OF SECRETS. My thanks to the author, publisher and Rachel of Rachel's Random Resources for putting this all together and letting me be part of it all! 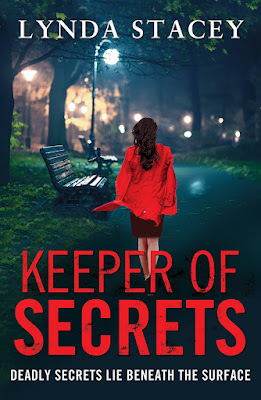 Should some secrets stay buried?
For as long as Cassie Hunt can remember her Aunt Aggie has spoken about the forgotten world that exists just below their feet, in the tunnels and catacombs of the Sand House. The story is what inspired Cassie to become an archaeologist.
But Aggie has a secret that she’s buried as deep as the tunnels and when excavation work begins on the site, Cassie is the only one who can help her keep it. With the assistance of her old university friend, Noah Flanagan, she puts into action a plan to honour Aggie’s wishes.
It seems the deeper Noah and Cassie dig, the more shocking the secrets uncovered – and danger is never far away, both above and below the ground …

Lynda is a wife, step-mother and grandmother who grew up in the mining village of Bentley, Doncaster, in South Yorkshire..

She is currently the Sales Director of a stationery, office supplies and office furniture company in Doncaster, where she has worked for the past 28 years. Prior to this she’d also been a nurse, a model, an emergency first response instructor and a PADI Scuba Diving Instructor … and yes, she was crazy enough to dive in the sea with sharks, without a cage.

Following a car accident in 2008, Lynda was left with limited mobility in her right arm. Unable to dive or teach anymore, she turned to her love of writing, a hobby she’d followed avidly since being a teenager.

Her own life story, along with varied career choices, helps Lynda to create stories of romantic suspense, with challenging and unpredictable plots, along with (as in all romances) very happy endings.

She lives in a small rural hamlet near Doncaster, with her ‘hero at home husband’, Haydn, whom she’s been happily married to for over 20 years.

Lynda joined the Romantic Novelists’ Association in 2014 under the umbrella of the New Writers’ Scheme and in 2015 her debut novel House of Secrets won Choc Lit’s Search for a Star competition. Lynda writes for both Choc Lit and Ruby Fiction.

This is a book based on a real place, and there's some fabulous photos and information at the end of the book to shed more light, and this was a wonderful aspect to the whole setting of the story and has made me aware of a place I never knew anything about!

As for the story itself, I found myself totally captivated by Cassie and the drama she found herself involved herself in as she tried to help a beloved family member and shows the lengths you'll go to help out someone you love.

Cassie has had a very traumatic past. With her sister Lisa, she was bullied as a child and had to deal with tragedy more than she should.  But with the love and support of Aggie, their Aunt, they have managed to move on with their lives and the love that Aggie had for the tunnels and secrets in The Sand House close by, has passed on to Cassie who has become an archeologist.

But Aggie has fallen ill, and wants Cassie to help retrieve something she's hidden in the tunnels ahead of someone else finding it in a big excavation that is planned for the site.  This leads to some startling revelations as we get to go back in time to hear the story from Aggie, and also to see what took place to Cassie and her family and I loved following all the different storylines.

Working back at home this also brings Cassie back in touch with an old friend, and I loved seeing how their relationship was rekindled and just how protective people were when they knew Cassie could be in danger.

I thoroughly enjoyed this story - I loved the historical aspects which played out nicely alongside the romance and intrigue of just what was so important to Aggie. The bond between them was so touching. In Cassie, there's a character who was easy to warm to and understand and I loved how there was  a little bit of everything within the pages of this book to keep you entertained, thrilled and shocked!